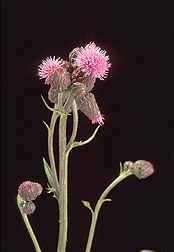 Have you seen this prickly plant? If so, contact scientists with the Agricultural Research Service: They want specimens to collect for studies in Maryland.

Canada thistle is a noxious weed that crowds out native plants and cultivated crops. It may have been introduced into the United States from Europe in the 1600s and today grows in diverse environments—from stream banks and grasslands to crop fields and roadsides. It comes back year after year and forms dense patches with the help of fast-growing roots.

Needless to say, digging up the thistle's roots isn't easy. And hacking at them only creates fragments capable of regenerating new plants. Severe infestations on vast land areas can make herbicide use costly and impractical.

But in some areas, you might notice a patch of Canada thistle that looks quite sickly. Closer examination might reveal stems and leaves of the weeds that are spindly and completely covered with yellow-orange specks. Weeds with these symptoms are also easy to notice because they emit a pleasant fragrant odor similar to Canada thistle flowers. These sickly thistles are of interest to scientists at the USDA-ARS Foreign Disease-Weed Science Research Unit in Fort Detrick, Md. There, the scientists are studying a naturally occurring rust disease fungus called Puccinia punctiformis that attacks Canada thistle. It's been in the United States for about as long as the thistle has. The researchers want to find out whether bolstering natural populations of this fungus could improve its effectiveness against Canada thistle, or at least weaken the weed enough that native plants or crops can compete. 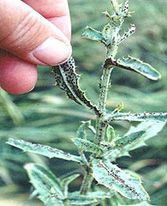 This fungus eventually kills the thistle it infects (see photo image of the fungus on Canada thistle). But it doesn't affect other plants or even close relatives of Canada thistle. People, pets and animals are also in no danger.

P. punctiformis can't be grown artificially in the lab—it only survives on living plants. That's why we need your help. If you've seen this fungal thistle-fighter in action, send an e-mail to USDA-ARS Biological Science Lab Technician Emily Smallwood at NAA-FDWSR-BC@ars.usda.gov. She’ll need to know the location where you saw the infected plant. Or you can call in your information to (301) 619-7344.

They'll want to inspect the thistles and collect specimens of diseased plants for laboratory confirmation. The scientists prefer sites that haven't been mowed or sprayed, as well as large infestations over solitary plants. Ultimately, spores from diseased thistles could be used under Federal permit to initiate disease in preselected field sites in Maryland to help stop the spread of this highly invasive weed.

So who knows—your willingness to help could lead to a new way of tackling this noxious, national menace and restoring lost natural habitat and viable cropland.

Below are some fast-facts on both Canada thistle and its rust fungus. 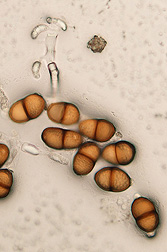 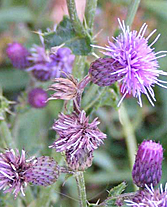 Send an email with the location of where you saw the infected plant to: