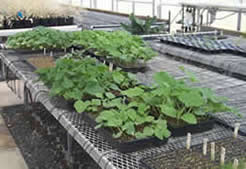 Cucurbita are members of the Cucurbitaceae family. Taxonomically, there are 6 species associated with this genus (C. maxima, C. mixta, C. moschata, C. pepo, C. ficifolia and C. foetidissima). We will be concentrating on seed production from the first 4 squash listed.

or can be hand-pollinated fairly easily because identifying male and female flowers is quite simple. The female flowers have what appears to be a small "squash" under their petals while a male has just a straight stem. Seed producers must keep in mind that varieties of the same species will cross-pollinate with other varieties of the same species.

When planting Cucurbita (or any cross pollinating crops) for seed, care must be taken to isolate same species varieties from one another, either through mechanical isolation (caging, bagging) or by distance isolation. Isolation distances of at least 1/2 - 1 mile should be sufficient between varieties. Minimum population sizes for all Cucurbita should be at least 50 plants (but understandable if less is undertaken considering the plot size needed for 50 plants!). 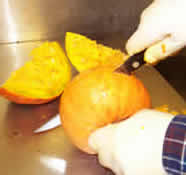 Winter squash should be harvested when fully mature and edible. Summer squash should be allowed to fully mature as well, although this will take them much past the edible stage. The shell of summer squash, when ripened, should not be able to be penetrated by a fingernail. After harvest, both summer and winter squashes should be allowed to sit for at least 3 weeks. This allows the seeds to reach their full potential. 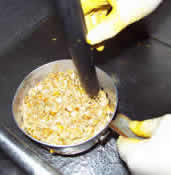 Cucurbita seed processing is pretty straight forward. Cut the squash open (take care to not hurt the seeds), scoop the seeds out, and rinse the pulp off. Once you get the pulp off the seeds, lay them out to dry on a screen. The only part you have to be real careful about is when you cut open a ripe summer squash, you will have to use an axe or shovel to smash the shell and you may scatter the seeds.