Systematics at the ARS Nematology Laboratory at Beltsville

The Nematology Laboratory (/ba/psi/nl) is the longest continuously named laboratory at Beltsville and the only USDA Laboratory containing more than two nematologists. It is one of four U.S. institutions housing six or more nematologists.

The Laboratory was begun in 1907 by Nathan A. Cobb (/Main/docs.htm?docid=9626), the father of nematology in the United States. Most of the Laboratory's work in the first half of the 1900's consisted of basic taxonomy and pathology, i.e., discovering and identifying nematodes and the plant diseases they cause. Cobb often spent many hours at a revolving table fitted with microscopes rotated to him by his technician, thereby facilitating the rapid examination and comparison of specimens.

The Laboratory moved to Beltsville from Washington, D.C. in 1940. With the discovery of soil nematicides in the 1940's, the Laboratory's research broadened to include research on nematode control. Nonetheless, the Laboratory continued to maintain national leadership in systematics, in large part because of the establishment of the USDA Nematode Collection (/pandp/docs.htm?docid=9944). 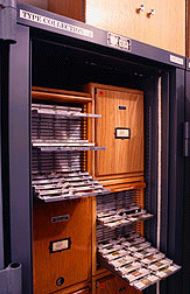 Beginning with a single specimen n 1960, the Collection is now the most important international repository of plant-parasitic nematode reference specimens and currently houses over 35,000 slides and vials, including designated types of over 1,500 species. These specimens are used by scientists around the world as reference material for identifying nematodes. A searchable, web-accessible database (http://www.nem.barc.usda.gov/database/search.cfm) includes information about the origin and host of all specimens.

Currently, two of the Laboratory's seven scientists conduct nematode systematics research and provide nematode species identifications to high-priority customers. The most important of these customers is APHIS, whose port inspectors and administrative personnel depend upon accurate identifications and related information about nematode distribution and plant hosts in order to make science-based regulatory decisions. The Laboratory's research interests include the improvement of the classification of plant-parasitic nematodes, the development of new molecular and morphological characters useful for nematode identification and phylogenetic analysis, and the creation of accurate keys and compendia useful for species identifications. 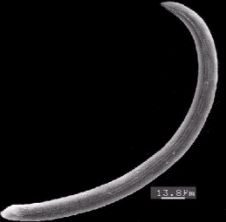 From 1955-1990, the Laboratory housed three full-time nematode systematists; today it possesses only two, although the agricultural problems caused by nematodes and the demands for nematode identification and information have increased. The Laboratory urgently needs expertise in several areas, probably the most important being the area of insect nematology. Following the retirement of an insect nematologist several years ago, the Laboratory has been unable to fulfill the needs of the scientific community in this area. Research collaborations in insect nematology have been successful, such as in the discovery of a nematode pathogen of the coffee berry borer, the most important pest of coffee. The Laboratory has other pressing needs for curatorial and research support staff.