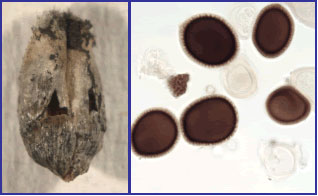 The $6 billion U.S. wheat export market was threatened due to Karnal bunt. Unwanted throughout the world, the Karnal bunt fungus appeared to be widespread in the United States. Based on a careful systematic study at the Systematic Botany and Mycology Laboratory (SBML), it was determined that the Karnal bunt fungus occurs in only a restricted area of the U.S. Because of this research, the wheat export market was saved.

...From the pages of Agricultural Research magazine
UNMASKED: A Karnal Bunt Fungus Look-Alike