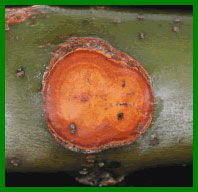 Coin canker of ash is a disease affecting cultivated ash trees in the Upper Midwest. During the summer of 2001, this new disease of ash trees broke out in nurseries in Michigan, killing thousands of young trees. Scientists at the Systematic Botany and Mycology Laboratory used DNA sequencing to identify this fungus as Phlyctema vagabunda, which is known to cause bull's-eye canker of apple in the U.S. and Canada. The identification of this fungus as one already present in the U.S. reduced fears that this was a new and invasive pathogen.