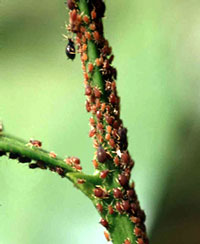 One of the most powerful outcomes of systematics research and service is the ability to predict the movements and invasiveness of pest species. An example of how this can benefit agriculture is demonstrated by what happened in the 1990s with an invasive aphid.

The brown citrus aphid (BCA), Toxoptera citricida (Kirkaldy), is thought to have originated in southeast Asia and has been introduced into various citrus growing regions of the world but was not present in the U.S. In addition to its mechanical feeding injury on citrus, it is one of the most efficient vectors of citrus tristeza virus which is especially injurious to trees grown on sour orange rootstock. Citrus tristeza virus was responsible for killing millions of citrus trees in Brazil and Argentina in the 1930s and 1940s. The spread of this deadly combination to the U.S. would have dealt a major blow to citrus growers.

During the early 1990s the scientist studying aphids in the Systematic Entomology Laboratory observed that the BCA was spreading throughout Central America and the Caribbean Basin and could pose a threat to the citrus industry in Florida. Based on the data that she accumulated she was issued a warning to Florida authorities that a BCA invasion was imminent. Because of the this warning, efforts were initiated to replace susceptible citrus rootstock with resistant varieties. When BCA was finally discovered in Florida in 1995, preventative measures were already in place, saving the citrus industry from what could have been large scale devastation had the attack not been anticipated.