Radiation is energy travelling through space, its most familar form is sunshine. Living things have evolved in an environment which has significant level of ionising radiation. Thus background radiation is what which is naturally and inevitably present in our environment.

The following video is a supplement to the training session. 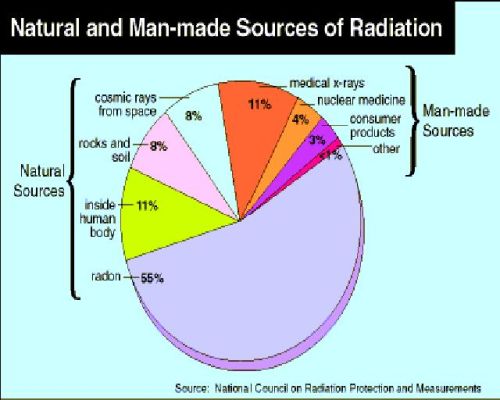 Radiation from radioactive materials occuring naturally in the earth's crust

Radiation from radioactive materials incorporated in the human body

Primarily Radon and its progeny

Radioactivity is the natural property of certain nuclides to spontaneously emit energy, in the form of ionizing radiation, in an attempt to become more stable.

Ionizing radiation has the ability to remove electrons from atoms, creating ions. The result of ionization is the product of negatively charged free electrons and positively charged ionized atoms.

There are 4 types of ionizing radiation:

Gamma rays have the highest penetrability of the three, and are shielded with thick concrete or lead

Two types of units are used for radiation:

Unit of activity of radiation is the Curie, abbreviated Ci. Most laboratories use only millicurie (mCi or .001 Ci) or microcurie (uCi or .000001 Ci)

Curie is an amount of radioactive material emitting 2.22 X 1012 disintegrations (particle or photons) per minute (DPM). Activities can be measured with an appropriate radiation detection equipmentsuch as a Geiger Counter. These instruments detect a percentage of the disintigrations and diplay in counts per minute (CPM)

The rad and rem are the two main radiation units used when assessing radiation exposure.

The rad (radiation absorbed dose) refers to the energy deposition by any type of radiation in any type of material.

The rem (radiation equivalent man) is the unit of human exposure and is a dose equivalent. It takes into account the biological effectiveness of differnt types of radiation. To account for these differences, a unit called a quality factor (QF) is used in conjuction with the radiation absorbed dose in order to dtermine the dose equivalent in rem:

As radiation energy is emitted, the material becomes less radioactive over time, decaying exponentially. The equation to calculate radioactive decay is:

A = Current amount of radioactivity

A0 = Original amount of radioactivity

t = the amount of time elasped from A0 to A

It is important to be careful of the units used for the time. Days, hours, and years must not be mised into the calculation.

Or you can use this Radiation Decay Calculator

Each radioactive nuclide has its own uniqe characteristic pattern of decay, based on:

Radiation causes ionizations in the molecules of living cells. These ionizations result in the removal of electrons from the atoms, forming ions or charged atoms. The ions formed can go on to react with other atoms in the cell causing damage.

At low doses, such as what we receive every day from background radiation, the cells repair the damage rapidly. Most cells that die are of little consequence, the body can just replace them. Cells changed permanently may go on to produce abnormal cells when they divide. In the right circumstances, these cells may become cancerous. This is the origin of our increased risk in cancer, as a result of radiation exposure.

Risk comparision show that radiation is a small risk when compared to risks we take every day. Radiation exposure is not a mysterious source of cancer, but a well-understood phenomenon, better understood than most other cancer-causing agent to which we are exposed.