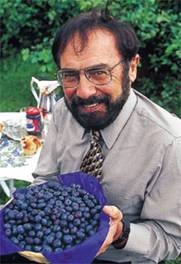 It has been close to 3 months since Dr. James Joseph, director of the Neuroscience Laboratory at the on Aging (HNRCA) at , died on Tuesday, June 1, 2010 - he was 66 years old.  Dr. Joseph is survived by his wife Marlene.

Born in , Dr. Joseph earned his BS in biology from Fairmont State College, his MA at , and his Ph.D. in behavioral neuroscience from the in 1976.  He then completed a post-doctoral fellowship at the NIA's Gerontology Research Center (GRC) in Baltimore, MD, and went on to work both at Lederle Laboratories and the Armed Forces Radiobiology Institute before returning to work as a senior scientist at the GRC. In 1993, Dr. Joseph joined the on Aging (HNRCA) at as the director of the Neuroscience Laboratory - a position he held until his unexpected death.

Dr. Joseph devoted his career to studying the mechanisms involved in age-related neuronal losses and subsequent deficits in motor and cognitive behavior.  One of his most significant findings was that diets, supplemented with fruits, vegetables, and/or nuts, could forestall or even reverse age-related declines in cognitive and motor function.  As lead scientist, he has authored or co-authored over 260 scientific articles, over 40 book chapters, and 2 books.  One book, The Color Code: A Revolutionary Eating Plan for Optimum Health, which outlines to lay audiences ways to improve diet through the inclusion of colorful fruits and vegetables, has been translated into 5 languages and plays a part in improving the diet of many in the and abroad.

Dr. Joseph's contributions to nutrition, neuroscience, and gerontology have also earned him the 1989 Sandoz Prize in Gerontology, the Stephanie Overstreet Award in Alzheimer Research, the 2000 Alex Wetherbee Award, the 2002 Glenn Foundation Award for Aging Research, the 2004 Harman Research Award, the 2005 International Award for Modern Nutrition, the 2007 USDA-ARS North Atlantic Area-Scientist of the Year award, and the 2009 GlaxoSmithKlein award for Flavanoid Research, among others.

In the lab, Dr. Joseph was a talented scientist, a vivacious supervisor, and a successful mentor.  Outside the lab, he was an outdoor adventurer, an entertaining friend, a loving husband, and above all a faithful Catholic.  His many contributions will be missed by all who knew him.

Click on the links below for other notes about Jim: