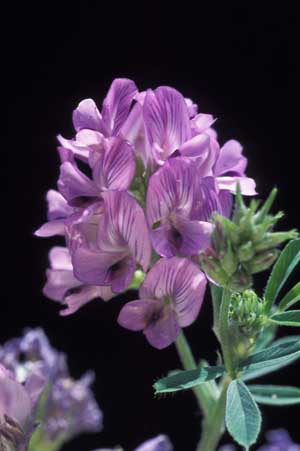 Alfalfa is the fourth most widely grown crop in the United States, with an estimated annual value of 11.7 billion dollars. There are 26 million acres cut for hay with an average yield of 2.3 tons per acre. One of the most important characteristics of alfalfa is its high nutritional quality. Alfalfa contains between 15 to 22% crude protein as well as high amounts of 10 different vitamins. Alfalfa can be a very productive crop with high levels of biomass accumulation. The record yield of one acre of alfalfa is 10 tons. Alfalfa hay is used as a feed primarily for dairy cows but also for horses, beef cattle, sheep, and other farm animals.

Alfalfa Cytogenetics:
Cytogenetics involves the study of chromosomes. Chromosomes contain the hereditary information of the cell. Genes are located on chromosomes, thus, it is important to study the structure and behavior of chromosomes to understand the inheritance of a trait. Alfalfa (Medicago sativassp. sativa (L.) L. & L.), a tetraploid (2n=4x=32), is the most important forage crop grown in the North America. Despite its importance to U. S. agriculture, cytogenetic research on alfalfa and its closely related species has lagged far behind other crops mainly due to four difficulties. We have been able to overcome some of these difficulties.

Annual Medicago species
What are annual Medicagospecies? They are legumes, related to alfalfa. They are sometimes referred to as medics. They are true annuals, they flower, set seed and die within one growing season. They are all self-pollinating, therefore bees are not required to produce seed. They are native to the Mediterranean region of the world. The U. S. National Plant Germplasm System contains 3159 accessions of annual Medicagospecies, this collection includes 35 different species. We have been working on the concept of developing core germplasm collections for their increased use. Recent interest in cropping systems with a sustainable agriculture approach has placed renewed interest on legumes. There are several examples how the annual medic maybe used in sustainable agriculture systems. throughout the U. S.