Until 2011, our work focused primarily on the use of plant viruses as biological expression vectors and practical applications of this technology for plant and animal disease control. The need for large quantities of safe and effective biomedicals for human and animal diseases has prompted the development and exploitation of plants as biofactories for the overproduction of therapeutic recombinant proteins. Plants represent inexpensive, environmentally friendly sources of raw materials and can be grown anywhere locally, thus eliminating the need of costly fermentation equipment. Our system used common plant viruses, which are engineered to contain and express sufficient amounts of useful proteins of interest. When virus infects the plant, it begins to make copies of the protein which are rapidly accumulating. Those proteins then are harvested from plants, purified, and used to make therapeutics, vaccines or antimicrobials. In addition to the development and application of plant viral-based vectors for novel disease control strategies, our goals included detection and molecular characterization of plant viral genomes, development of diagnostic methods, study of the mechanisms of viral pathogenesis and pathogen-host interaction.

Our new project (since 2011) aims to generate fundamental knowledge on expression and regulation of genes associated with alfalfa development and stress tolerance and to use the acquired information toward improvements of alfalfa germplasm and economic viability. The proposed work fits into a large, comprehensive approach that ARS undertook to enhance alfalfa adaptation to environmental conditions. So far, we have performed Illumina RNA-sequencing in alfalfa genotypes contrasting in salt tolerance in order to estimate a broad spectrum of genes affected by salt stress. A number of salt-responsive genes were identified and assigned to functional classes and gene-candidates with roles in the adaptation to salinity were proposed. The species-specific data on stress-responsive genes obtained in this study and other information on alfalfa genomics will be used to identify molecular markers associated with resistance and adaptation to abiotic and biotic stresses in alfalfa. 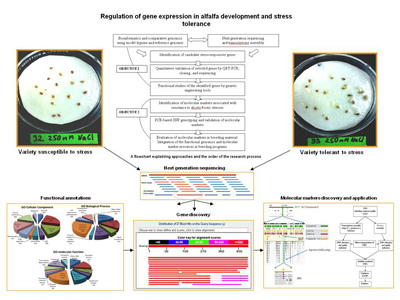 Please click on the following link for a better resolution of the figure above.

In 2019, we have initiated a new project with the two main objectives:

1. Identify and develop molecular characterizations of new and emerging disease-causing pathogens in alfalfa to prevent potential threats to alfalfa production.

Many known bacterial, fungal, oomycete, nematode, mollicute or viral diseases represent causes of concern for alfalfa industry. In addition, new, emerging and invasive pathogens of uncertain impact pose a serious challenge to the alfalfa improvement. Rapid identification of the causal agents, their characterization at the molecular level and development of sensitive diagnostic assays will reduce yield losses and prompt new insights into practices of alfalfa disease management.

2. Identify genes involved in stress responses in alfalfa to define the genetic basis of resistance and accelerate breeding programs.

The following diagram illustrates how these objectives are integrated into the project plan: 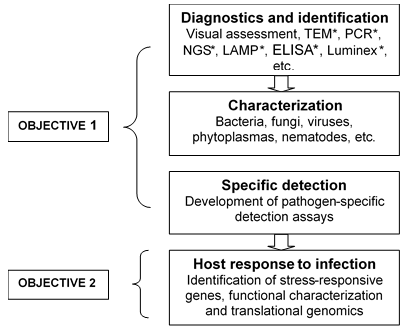 Visit our curated "Alfalfa Transcription Factor Database" by clicking on the following link.