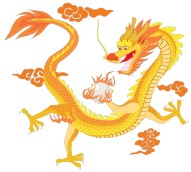 Huanglongbing, also known as citrus greening, is caused by a bacterium known as Liberibacter.  There are currently three known species of this 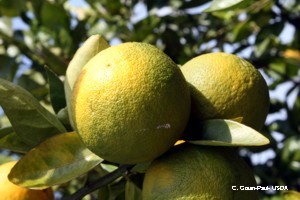 Citrus greening is so named because the fruit of infected trees remain green or partially green.  It is also called citrus yellow shoot or yellow dragon, translations of the Chinese "huanglongbing".  The leaves of the trees develop an asymmetrical yellow splotchy pattern.

Huanglongbing, like many other plants diseases, is spread by humans who have illegally brought plants or pieces of plants home with them when they have traveled.  It can also be spread if the young grafted plants are grown but are not protected by insect proof screening or tested before planting in the field.  Finally once in the field it is spread by an insect known as the psyllid.  The psyllid is endemic to the USA now in all citrus growing areas.  Huanglongbing is found worldwide in all citrus growing areas except the Mediterranean basin.  In the United States it is in all Florida citrus groves. Isolated outbreaks, which may have been contained, have occurred in southern California and Texas.   However the insect vector is established in these areas as well, so the expectation is that the disease will soon appear as well.

The genome of the pathogen has been deciphered by sequencing DNA obtained from a single heavily infected psyllids. 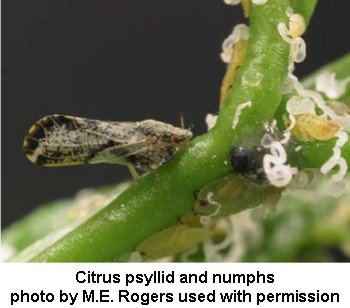 For several horticultural and botanical reasons, there is no way to breed resistance to greening.   The method used to slow the spread of the disease is to chemically control the psyllid.  This is difficult and is not a long term solution for the problem.