I am part of an interdisciplinary team charged with developing behavioral and biocontrol tactics to manage insect pests in urban landscapes. My personal research, performed in collaboration with Richard Olsen of the Floral & Nursery Plants Research Unit, is at the United States National Arboretum (USNA) in Washington, D.C. The USNA offers the unique opportunity to perform a controlled experiment within an environment that is a microcosm of the suburban Mid-Atlantic, comprising a wide variety of exotic and native landscape plants arrayed in formal gardens and park lands.

This project compares the impact of native and exotic plant complexes on pest and natural enemy populations in managed urban landscapes, explicitly testing the hypothesis that landscapes dominated by native plants will have greater natural enemy abundance and diversity, and concomitantly fewer pests and less plant damage, than landscapes dominated by exotic plants. The hypothesis is based on the assumption that the long co-evolutionary history of native natural enemies and the native plants that supply them with foraging sites, alternate prey, and nutritional supplements make them better able to survive, reproduce, and attack pests than they would if foraging among exotic plants, with which they did not evolve. 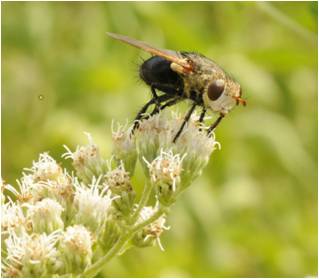 Natural enemies derive nutrition from plant parts and secretions. Larvae of parasitic insects are exclusively predaceous, but their parents, like this tachnid fly (right) feeding on nectar of native boneset, require plant foods to survive and reproduce. Many predator groups once thought to be exclusively predaceous, like spiders, also feed on nectar, while predatory beetles feed on pollen and seeds; some natural enemies also feed on honeydew excreted by plant pests. If the hypothesis is correct, native natural enemies will prefer nectar, pollen, and seeds of native plants to those of exotics, and will survive and reproduce better on them. 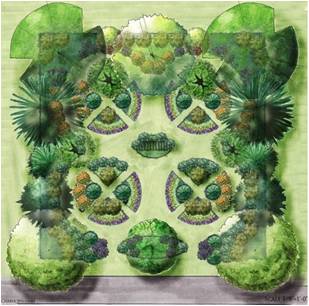 The experiment is conducted on three widely separated blocks (replicates) at the USNA, each containing two 25 meter-square simulated backyards vegetated with upper and understory trees, shrubs, and perennials, interspersed with turf walk-ways. In each pair of plots, the woody plants and perennials in one plot are all exotic, while in the other they are all native, e.g., Himalayan vs. Eastern white pine, Norway vs. sugar maple, bird vs. choke cherry, Korean vs. Canada dogwood, and so on (please see Table, below). 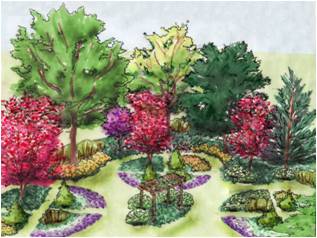 During the five-year course of the experiment, data will be taken on the identity and number of insect pests, the extent of insect damage to plants, and the number and density of natural enemies. DNA finger printing will be used to identify immature insects, and to document predator-prey and parasitoid-host interactions.