Toxoplasmosis, caused by the protozoan parasite Toxoplasma gondii, is one of the most common parasitic infections of man and other warm-blooded animals. It has been found worldwide from Alaska to Australia. Nearly one-third of humanity has been exposed to this parasite. In most adults it does not cause serious illness, but it can cause blindness and mental retardation in congenitally infected children and devastating disease in immunocompromised individuals. 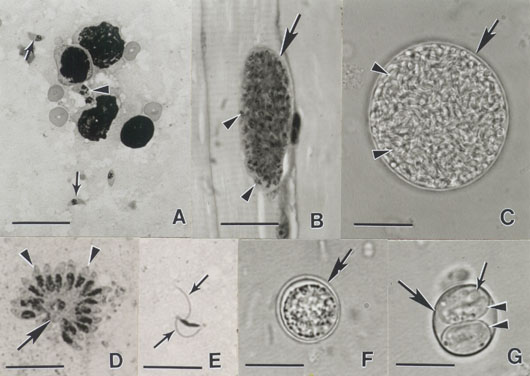 G. Sporulated oocyst with a thin oocyst wall (large arrow), 2 sporocysts (arrowheads). Each sporocyst has 4 sporozoites (small arrow) which are not in complete focus. Unstained.

Humans become infected by ingesting food and water contaminated with oocysts from infected cat feces, or by ingesting tissue cysts in under cooked or uncooked meat. Contamination of the environment by oocysts is widespread, as oocysts are shed by domestic cats and other members of the Felidae. Domestic cats are probably the major source of contamination since oocyst formation is greatest in domestic cats. Cats may excrete millions of oocysts after ingesting as few as 1 bradyzoite or 1 tissue cyst, and many tissue cysts may be present in one infected mouse. Generally, only about 1% of cats in a population are found to be shedding oocysts at any given time. Oocysts are shed for only a short period (1-2 weeks) in the life of the cat, however, the enormous numbers shed assure widespread contamination of the environment. Under experimental conditions, infected cats can shed oocysts after reinoculation with tissue cysts. It is not known whether repeated shedding of oocysts occurs in nature, but this would greatly facilitate oocyst spread. Sporulated oocysts survive for long periods under most ordinary environmental conditions. They can survive in moist soil, for example, for months and even years. Oocysts in soil do not always stay there, as invertebrates like flies, cockroaches, dung beetles, and earthworms can mechanically spread these oocysts and even carry them onto food. Congenital infection can occur in cats, and congenitally infected kittens can excrete oocysts, providing another source of oocysts for contamination. Infection rates in cats reflect the rate of infection in local avian and rodent populations because cats are thought to become infected by eating these animals. The more oocysts there are in the environment, the more likely it is that prey animals will become infected, and this results in increased infection rates in cats.

In the United States and the United Kingdom, it is estimated that 16 to 40% of people are infected with T. gondii, whereas in Central and South America and continental Europe, estimates of infection range from 50 to 80%. Most infections in humans are asymptomatic, but at times the parasite can produce devastating disease. Infection may be congenitally or postnatally acquired. Congenital infection occurs only when a woman becomes infected during pregnancy. Congenital infections acquired during the first trimester are more severe than those acquired in the second and third trimester. While the mother rarely has symptoms of infection, she does have a temporary parasitemia. Focal lesions develop in the placenta and the fetus may become infected. At first there is generalized infection in the fetus. Later, infection is cleared from the visceral tissues and may localize in the central nervous system. A wide spectrum of clinical diseases occur in congenitally infected children. Mild disease may consist of slightly diminished vision, whereas severely diseased children may have the full tetrad of signs: retinochoroiditis, hydrocephalus, convulsions, and intracerebral calcification. Of these, hydrocephalus is the least common but most dramatic lesion of toxoplasmosis. By far the most common sequel of congenital toxoplasmosis is ocular disease.

The socio-economic impact of toxoplasmosis in human suffering and the cost of care of sick children, especially those with mental retardation and blindness, are enormous. The testing of all pregnant women for T. gondii infection is compulsory in some European countries, including France and Austria. The cost benefits of such mass screening are being debated in many other countries.

Postnatally acquired infection may be localized or generalized. Oocyst-transmitted infections may be more severe than tissue cyst-induced infections. Enlarged lymph nodes are the most frequently observed clinical form of toxoplasmosis in humans. Lymphadenopathy may be associated with fever, fatigue, muscle pain, sore throat, and headache. Although the condition may be benign, its diagnosis is vital in pregnant women because of the risk to the fetus. In a British Columbia outbreak, of 100 people who were diagnosed with acute infection, 51 had lymphadenopathy and 20 had retinitis.

Encephalitis is the most important manifestation of toxoplasmosis in immunosuppressed patients as it causes the most severe damage to the patient. Infection may occur in any organ. Patients may have headache, disorientation, drowsiness, hemiparesis, reflex changes, and convulsions, and many become comatose. Encephalitis caused by T. gondii is now recognized with great frequency in patients treated with immunosuppressive agents.

Toxoplasmosis ranks high on the list of diseases which lead to death of patients with acquired immunodeficiency syndrome (AIDS); approximately 10% of AIDS patients in the U.S. and up to 30% in Europe are estimated to die from toxoplasmosis. Although in AIDS patients any organ may be involved, including the testis, dermis, and the spinal cord, infection of the brain is most frequently reported. Most AIDS patients suffering from toxoplasmosis have bilateral, severe, and persistent headache which responds poorly to analgesics. As the disease progresses, the headache may give way to a condition characterized by confusion, lethargy, ataxia, and coma. The predominant lesion in the brain is necrosis, especially of the thalamus .Sulfadiazine and pyrimethamine (Daraprim) are 2 drugs widely used for treatment of toxoplasmosis. While these drugs have a beneficial action when given in the acute stage of the disease process when there is active multiplication of the parasite, they will usually not eradicate infection. It is believed that these drugs have little effect on subclinical infections, but the growth of tissue cysts in mice has been restrained with sulfonamides. Certain other drugs, diaminodiphenylsulfone, atovaquone, spiramycin, and clindamycin are also used to treat toxoplasmosis in difficult cases.

To prevent infection of human beings with T. gondii, especially pregnant women, children, and immunocompromised individuals, contact with cats, soil, and raw meat should be avoided, and people should be made aware of the dangers of toxoplasmosis . Pet cats should be fed only dry, canned, or cooked food. The cat litter box should be emptied every day, a task to be avoided by susceptible groups listed above. Gloves should be worn while gardening. Vegetables should be washed thoroughly before eating because they may have been contaminated with cat feces. The hands of people handling meat should be washed thoroughly with soap and water before they begin other tasks. All cutting boards, sink tops, knives, and other materials coming in contact with uncooked meat should be washed with soap and water also. Toxoplasma gondii organisms in meat can be killed by exposure to extreme heat or cold. Tissue cysts in meat are killed by heating the meat throughout to 67C or by cooling to -13C. Toxoplasma in tissue cysts are also killed by exposure to 0.5 kilorads of gamma irradiation. Meat of any animal should be cooked to 67C before consumption, and tasting meat while cooking or while seasoning should be avoided. At present, there is no vaccine to prevent toxoplasmosis in humans.

Diagnosis of toxoplasmosis in humans is made by biologic, serologic, histologic, or molecular methods, or by some combination of the above. Clinical signs of toxoplasmosis are non-specific and are not sufficiently characteristic for a definite diagnosis. Toxoplasmosis in fact mimics several other infectious diseases.

The finding of antibodies to T. gondii in one serum sample only establishes that the host has been infected at some time in the past. It is best to collect 2 samples from the same individual, the second collected 2 to 4 weeks after the first. A 16-fold higher antibody titer in the second sample indicates an acute infection. A high antibody titer sometimes persists for months after infection. A rise in antibody titer may not be associated with clinical symptoms, for as indicated earlier, most infections in humans are asymptomatic. The fact that titers persist in infected people after clinical recovery complicates the interpretation of the results of serological tests. Establishing recency of infection in pregnancy is of clinical importance with respect to medical intervention to minimize damage to the fetus, and there is no one test that can achieve this at the present time.

Toxoplasma gondii can be isolated from patients by inoculation of laboratory animals and tissue cultures with secretions, excretions, body fluids, tissues taken by biopsy, and tissues with macroscopic lesions taken postmortem. Using such specimens, one may not only attempt isolation of T. gondii, but one may search for T. gondii microscopically using traditional histochemical stains or by immunohistochemical staining of parasites with fluorescent or other types of labeled T. gondii. Recent studies have shown that monoplex and multiplex PCR can be useful for specifically identifying T. gondii (using the B1 gene as the target sequence) from tissue biopsies, cerebrospinal fluid, vitreous from patients with undiagnosed uveitis, fetal blood, and amniotic fluid.

Although T. gondii has been isolated from soil, there is no simple method for oocyst isolation from soil that is useful on an epidemiological scale. Although attempts to recover T. gondii oocysts from water samples in the British Columbia outbreak were unsuccessful, methods to detect oocysts were reported. At present, there are no commercial reagents available to detect T. gondii oocysts in the environment.

Virtually all edible portions of an animal can harbor viable T. gondii. In one study, viable T. gondii was isolated from 17% of 1,000 adult pigs (sows) from a slaughter plant in Iowa. T. gondii infection is also prevalent in game animals. Among wild game, T. gondii infection is most prevalent in black bears and in white-tailed deer. Approximately 80% of black bears are infected in the U. S., and about 60% of raccoons have antibodies to T. gondii. Because raccoons and bears scavenge for their food, infection in these animals is a good indicator of the prevalence of T. gondii in the environment.

The number of T. gondii tissue cysts in meat from food animals is very low. It is estimated that as few as 1 tissue cyst may be present in 100 grams of meat. Therefore, without using a concentration method, it is not practical to detect this low level of T. gondii infection. The detection of T. gondii DNA in meat samples by PCR has been reported, but there are no data on specificity and sensitivity of this method to detect T. gondii in meat samples. A highly sensitive method using a Real-Time PCR and fluorogenic probe was found to detect T. gondii DNA from as few as 4 bradyzoites.