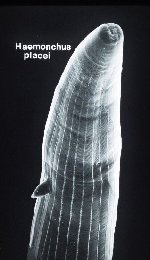 (Haemonchus) of ruminants of North America, the most important nematode pathogens of sheep in southeastern United States and of cattle in warm, moist pastures. The keys employed newly discovered characters of the synlophe (surface cuticular ridges) and permit the morphological identification of single adult specimens of either sex for the first time.

Developed first phylogenetic classification of nematodes of the family Trichostrongylidae which includes most of the economically important nematode parasites of ruminants. This new classification of the subfamilies for the first time established monophyly for the family and subfamilies of these important groups, a prerequisite for further studies on their evolution.

Developed diagnostic probes specific for species of Trichinella. Species and subspecific populations from domestic hosts and wildlife can be identified without costly, time-consuming animal infections. This work revolutionized the identification of Trichinella, which cannot be identified morphologically, and contributed greatly to an understanding of the epidemiology of this important parasite of swine and other domestic animals and wildlife.

Developed diagnostic probes for species of the genera Ostertagia, Haemonchus, Cooperia and Nematodirus. The probes can be used for any developmental stage in the life cycle of the parasite including difficult to identify eggs and larvae. The results may lead to the development of cow-side diagnostic kits to determine the presence and intensity of infections in individual animals.  This provides a means to tailor treatment to individual animals reducing the cost and the risk of environmental damage or the development of resistance to drugs.

Developed the Arctic Refugium Hypothesis which postulated that the Arctic and Subarctic were regions of evolutionary diversification rather than net extinction during the last million years. The hypothesis provides a framework for evaluating evolutionary relationships between hosts and parasites in the Holarctic, and is the focus of broad based studies in biodiversity.

Following the discovery of Nematodirus battus in sheep, the recently introduced pathogen was redescribed and APHIS personnel were trained for a nationwide survey of sheep. Five populations of this species from worldwide localities were studied using DNA sequences in an effort to determine the source of the importation and elucidate the mysterious history of this nematode that appeared as a serious pathogen of sheep in England in 1950 and was subsequently identified in Norway, The Netherlands, France, and in 1985 in the US and Canada. Results of the DNA studies indicate the probability of a European origin for the nematode and importation to the US through Canada.

Provided phylogenetic resolution among species of Taenia, economically and medically important tapeworms of humans and domesticated hosts. This information is critical to understanding the role of humans as hosts for these tapeworms. These data will be of significance in medicine and veterinary practice in providing more critical diagnostics and for understanding patterns of life cycles and host relationships for these species.

Discovered and described a new pathogenic nematode from ostriches in North Carolina and Texas in a collaborative project with the College of Veterinary Medicine, North Carolina State University and the Texas Veterinary Medical Center, Texas A&M University. Nematodes may cause significant losses of valuable ostriches in the rapidly growing ratite industry in the United States.  The nematode was apparently imported with ostriches from Africa and is now widespread in North America.  This information is important to scientists, producers and the Animal and Plant Health Inspection Service who are interested in controlling the nematode and in preventing future importations of exotic pathogens.

Paired subcuticular glands with microscopic surface pores have been discovered near the vulva of female Trichostrongyloid nematodes and they are being investigated as a possible source of a sex attractant for male nematodes. The discovery was made during microscopic studies required to identify the economically important nematodes. If the new organ is determined to be a source of a sex attractant, a biological control might be developed that could reduce the cost of controlling the nematodes in meat and dairy animals. Such a biological control would be of considerable interest to producers, especially in organic and sustainable agricultural systems.

Collaborated with researchers in Scotland and Australia to identify nematode parasites of horses to be used to develop molecular probes that will permit nematode eggs in the feces of horses to be identified. The probes will be powerful research tools for determining which species are drug resistant or most pathogenic, for evaluating antiparasitic drugs and biological control agents, and for identifying the species causing larval cyathostomiasis, an emerging disease of horses.

Discovered a common synlophe pattern among genera of the Haemonchinae that significantly advanced the utility of this morphological character for identification and classification of these important nematode parasites of cattle, sheep, goats and deer. The Haemonchinae includes 3 genera, Haemonchus, Mecistocirrus and Ashworthius, commonly referred to as large stomach worms that cause significant production losses due to morbidity, mortality, cost of treatment and suboptimal use of contaminated pastures. The new information improved the ability of scientists to identify endemic and exotic species that threaten farmed ruminants. This information is essential to evaluate biological and chemical treatment and control agents, determine the importance of reservoir hosts such as wildlife, evaluate emerging or recently imported pathogens and to prevent the importation of others. .

Developed an international standard taxonomy for the strongylid nematode parasites of horses. Led an international team that revised and improved the standard system of names used for all research to diagnose and control the most pathogenic nematode parasites of horses. The information is essential for progress in developing diagnostic probes, biological control agents and antiparasitic drugs for larval cyathostomiasis, an emerging disease of horses worldwide.

Discovered a cryptic species of abomasal nematode in North American ruminants.  This discovery and description of a new species of medium stomach worm, of the genus Teladorsagia, clearly indicates that we do not yet have a basic understanding of the species diversity of nematode pathogens in domestic and wild ruminants in North America.  The new species was recognized on the basis of DNA sequence differences and comparative morphology.  Previously, the long-spicule forms of medium stomach worms in domestic and wildlife species were believed to belong to a single species.  This work is critical to understanding the interface between domestic and wild ruminants, and the potential for emerging disease related to these parasites within the context of global change.