Sarcocystis neurona is the most common cause of equine protozoal myeloencephalitis (EPM) in horses in America. It is a single celled parasite belonging to the group called coccidia (Apicomplexa: Sarcocystidae) with opossums as the definitive hosts and a variety of mammals as aberrant or natural intermediate hosts . Only asexual stages have been identified in the aberrant intermediate hosts, and they are confined to the brain and spinal cord, and any part of the central nervous system (CNS) may be affected. In histologic sections of CNS, individual merozoites are about 3-5 um long and contain a single, centrally located vesicular nucleus. The sarcocysts are microscopic (~700 um long) with a 1-3 um thick sarcocyst wall. The bradyzoites are slender and tiny (~ 5 um long). Sarcocystis neurona sporocysts from opossum faeces are ~ 10 x 8 um in size. 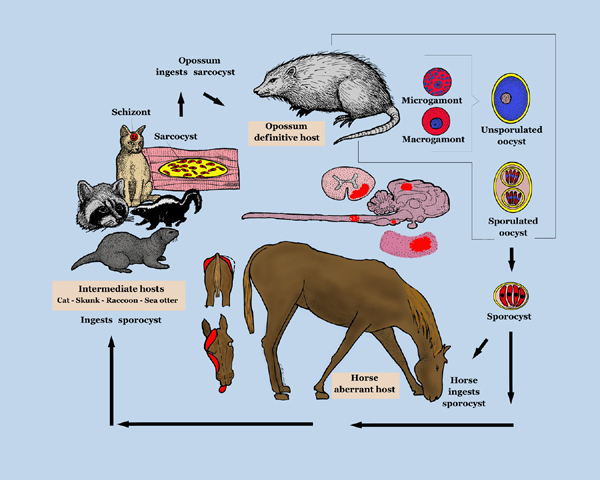 It has the most unusual life cycle for any species of Sarcocystis as unlike other species of Sarcocystis, S. neurona has wide host range for its intermediate hosts. Opossums (Didelphis virginiana, D. albiventris) are its definitive (reservoir) hosts and excrete oocysts and sporocysts (environmentally resistant stage)in their feces. Raccoons, armadillos, sea otters, skunks, cats and possibly other mammals are intermediate hosts. These animals ingest the sporocysts , which after many asexual cycles, lead to the development of sarcocysts (resting stage) in their muscles. Infection of the final host is by the ingestion of the sarcocysts from the muscles of the intermediate hosts. The bradyzoites are released in the intestines of the definitive host. They undergo a sexual cycle and this ultimately result in the production of sporulated oocysts, which are excreted in the feces of the opossum. Horses are considered its aberrant hosts because only schizonts and merozoites (no sarcocysts) have been identified , confined to the brain and spinal cord.

The pathogenesis of EPM is not clear because the complete life cycle is unknown. Sarcocystis neurona can parasitize all regions of the CNS, from the anterior cerebrum to the end of the spinal cord. Sarcocystis neurona schizonts and merozoites are found in neurons, mononuclear cells, glial cells, and perhaps other neural cells. Studies in immune deficient, interferon gamma gene knockout (KO) mice fed S. neurona sporocysts indicate that S. neurona initially multiplies to a limited extent in visceral tissues and then is transported to the CNS probably via leukocytes. Three weeks after infection, S. neurona is mainly confined to the CNS. Clinical signs of EPM are dependent on the area of the CNS parasitized. The early clinical signs of stumbling and frequent interference are often easily confused with a lameness of either the thoracic and/or the pelvic limbs. In many horses the disease tends to have a gradual progression of clinical signs including ataxia, but in some horses there may be mild clinical signs followed by a rapidly progressive course. On physical examination, the vital signs are usually normal, although some horses may appear thin and mildly depressed. Neurological examination often reveals an asymmetric weakness, ataxia and spasticity involving all 4 limbs. Frequently, areas of hypalgesia or complete sensory loss may be noted. The most frequent brain or cranial nerve deficits observed in horses appear to be head tilt, depression, facial nerve paralysis, and difficulty swallowing, although signs are not limited to these areas. Gait abnormalities are often a result of damage to the spinal cord and may be quite variable depending on the location and severity of the lesion.

Sarcocystis neurona stages and lesions.
(A). Cross section of spinal cord of horse with focal areas of discoloration (arrows) indicative of necrosis. Unstained.

(B). Section of spinal cord of a horse with severe EPM. Necrosis, and a heavily infected neuron (arrows), all dots (arrows) are merozoites. H and E stain .

(C). Higher magnification of a dendrite with numerous merozoites (arrows). One extracellular merozoite (arrowhead) and a young schizont (double arrowhead).

(H). An oocyst with two sporocysts each with banana-shaped sporozoites. Unstained.

Many ancillary diagnostic procedures may be required to differentiate primary musclo-skeletal disorders and other neurologic diseases from EPM. The immunoblot analysis of serum and CSF is the current diagnostic test. The current system for commercial testing utilizes 10-20%,15 cm polyacrylamide gradient gels to achieve optimal protein separation. Molecular weights are assigned using Bio-Rad broad range, pre-stained molecular weight markers. Under these conditions, the specific proteins used for diagnostic testing have relative mobilities of 14.5, 13, and 7 Kd. A direct agglutination test using S. neurona merozoites can detect antibodies to S. neurona but it has not been evaluated for the diagnosis of EPM. Polymerase chain reaction testing of equine CSF also provides information regarding the presence of S. neurona DNA in the CNS.

Treatment of horses suspected to have EPM should be done as quickly as possible after clinical signs of the disease are recognized. For many years treatment has been confined to the use of dihydrofolate reductase inhibitors such as sulfonamides and pyrimethamine. Usual treatment involves the use of sulfadiazine at a dose of 20 mg/kg orally, once or twice a day. In addition, affected horses should be placed on pyrimethamine at the dose of 1.0 mg/kg given once a day orally for 120 days or longer. Diclazuril and Toltrazuril, and other coccidiostats are being evaluated to treat EPM The recommended control measures are proper hygiene and prevention of access of opossums to horse feed and pasture.

Although Thoroughbreds, Standardbreds, and Quarter Horses are affected the most, there does not appear to be a breed predilection. EPM is confined to the Americas. In the United States, approximately 30 to 50% of horses were reported to have S. neurona antibodies. Cases of EPM seen in Europe, South Africa and Asia were in horses that had been imported from the western hemisphere. Clinical EPM cases are usually sporadic and more than one case is seldom seen at a particular farm. However, clusters of cases have occurred in a few instances, which would suggest all of the risk factors necessary for disease were at those facilities. The distribution of EPM follows the distribution of opossums. In North America, Didelphis virginiana occurs widely except on Prince Edward Island in Canada. The number of sporocysts shed by opossums has not been determined, although millions of sporocysts of undetermined species may be present in opossum intestines.