A naturally occurring virus co-discovered by Agricultural Research Service (ARS) and university scientists may offer a way to undermine a costly fungal threat to wheat, barley and other small-grain crops.

The fungus, Fusarium graminearum, is the chief culprit behind a disease called Fusarium head blight, or "scab." Unchecked with fungicides or other measures, scab diminishes the yield and quality of the crops' grain. Under wet, humid conditions, the scab fungus can release a toxin called deoxynivalenol (a.k.a., "vomitoxin") that can contaminate the grain, reducing its point-of-sale value or leading to outright rejection depending on end use.

Now, however, a team of scientists with the ARS Application Technology Research Unit in Wooster, Ohio, and South Dakota State University in Brookings (SDSU) has discovered a strain of a fungal virus, or "mycovirus," that disables the scab fungus's vomitoxin-making machinery.

In nature, the mycovirus, a species called Fusarium graminearaum Vg1, infects the scab fungus to replicate and spread. But the new mycovirus strain, dubbed F. graminearum Vg1-SD4, takes such attacks a step further by stopping the scab fungus from making vomitoxin—a fortuitous benefit for wheat plants. 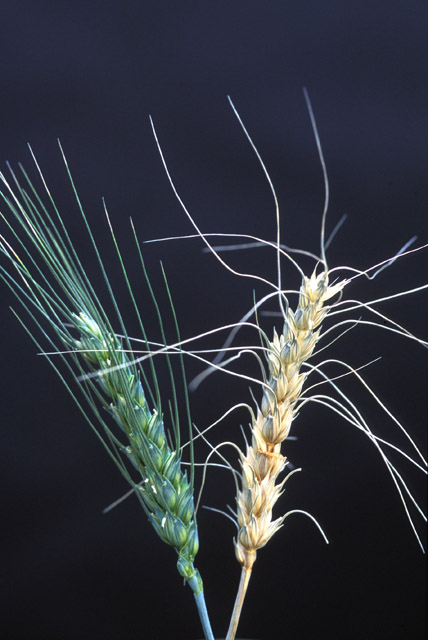 A "mycovirus" could help stop the Fusarium head blight fungus from contaminating wheat grains and giving them a ghastly bleached appearance (shown at right).

Indeed, in laboratory and greenhouse experiments, cultures of the scab fungus that had been infected with the mycovirus strain grew slower than non-infected cultures and produced no vomitoxin in the grain of susceptible potted wheat plants. In contrast, the grain of wheat plants exposed to mycovirus-free cultures of scab contained 18 ppm of vomitoxin, a byproduct of the fungus's metabolism that can be harmful to livestock and human health.

ARS molecular biologist Shin-Yi Lee Marzano and her collaborators discovered the mycovirus strain after sequencing its genomic makeup and noticing slight differences from its "parent" species, FgVg1, which had been maintained in a live culture of the scab fungus and known to science for about a decade.

Marzano cautioned that their research—reported in the July 2022 issue of Microorganisms—is still in its early stages. However, with further study, the mycovirus strain could prove useful as a biological control agent that could be formulated and sprayed onto susceptible wheat varieties or other small-grain crops. That, in turn, could potentially offer growers another tool to use in avoiding costly losses to scab and its contamination of grain destined for livestock and human consumption.