First reported in the late 1970s in Kansas and Nebraska, MLN today has become a global threat to corn (maize) production worldwide, particularly in East Africa, where initial outbreaks in Kenya inflicted yield losses of up to 90 percent. Maize lethal necrosis also is problematic in South America and Asia.

The disease strikes when corn plants are co-infected by the maize chlorotic mottle virus, which was first detected in Peru, and by maize-infecting potyviruses, which occur globally. Foliar symptoms progress from minor yellow mottling and mosaic-like symptoms to severe necrosis throughout the leaf. Other symptoms include stunted growth, premature aging, poor grain-fill of ears and drying of the entire plant followed by death.

Growers use a combination of methods to prevent or minimize MLN. These include controlling weeds like johnsongrass that can serve as reservoirs of the viruses as well as the insects that transmit them while feeding. Another tactic is rotating corn with non-host crops on which the culprit viruses cannot survive. However, planting disease-resistant varieties is the cornerstone defense, noted Erik Ohlson and Mark Jones, both with the ARS's Corn, Soybean and Wheat Quality Research Unit in Wooster.

Toward that end, the two ARS researchers developed the "synthetic" corn population OhMCMV-1 as a germplasm resource. Resistance to maize chlorotic mottle virus is rare and OhMCMV-1 offers breeders a new breeding resource with novel combinations of resistance genes that can be used. 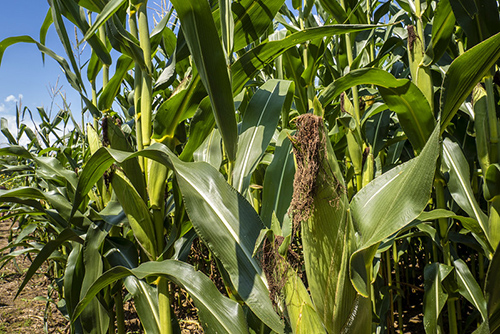 Scientists are working to shore up the defenses of corn against maize lethal necrosis, a global threat of the crop. (Photo by Preston Keres, USDA)

"A synthetic population is a term used to describe a breeding population that was developed from several parental lines with a specific trait or breeding goal," Ohlson, a plant geneticist, explained. "In this case, five MLN-tolerant corn lines were cross-pollinated with each other in all combinations over multiple generations to recombine the genetic backgrounds from these five parents." The researchers selected the most maize chlorotic mottle-tolerant plants to recombine and advance to the next generation, a breeding strategy called recurrent selection.

Growth chamber tests show that OhMCMV-1 plants can withstand the viruses that cause MLN as well as or better than its five parental lines. Credit for that goes to new combinations of multiple unique resistance genes from the five parental corn lines used for population development.

OhMCMV-1 is not intended for commercial production directly, but rather as breeding material from which elite commercial varieties or hybrids can be developed, according to the researchers, who published the results of their evaluations of OhMCMV-1 in the Journal of Plant Registrations.  The population is being released after one cycle of selection for tolerance to maize chlorotic mottle virus and a second cycle of selection is in progress, added Jones, an agronomist.

Current practices used by U.S. corn growers have kept the disease in check, coupled with the limited occurrence of maize chlorotic mottle virus. However, OhMCMV-1 can nonetheless be adapted to conditions in the U.S. Corn Belt, if necessary—thanks to a temperate-adapted parent among the five that were used.

Small quantities are available to qualified professional plant breeders and other research scientists upon request.