Chocolate is made from cacao beans, and research shows that 20 - 40 percent of the world's cacao beans are lost to cacao plant diseases. This presents a major problem as the confectionary industry depends heavily on chocolate. Similarly, chocolate candies are also a major market for U.S. agricultural commodities such as peanuts, almonds, milk, and sugar. Demand for chocolate has been steadily increasing and there is a fear that one day cacao plant diseases may prevent enough cacao bean production to meet consumer need.

Black pod rot is responsible for the greatest production losses in cacao, primarily because it can be found in every region where cacao is commercially grown. The disease is caused by several species of fungal-like organisms called oomycetes that spread rapidly on cacao pods under humid conditions. Within days of being infected, cacao pods turn black and rotten, rendering them useless for harvesting. An ARS research team found that black pod rot in Hawaii and Puerto Rico is caused by an oomycete called Phytophthora palmivora, which is relatively less aggressive than the oomycete species known to cause black pod rot in other parts of the world. However, Phytophthora palmivora is capable of surviving higher temperatures and is expected to become an increased problem as temperatures rise due to climate change.

There are also several viruses that affect cacao plants.  One in particular, the cacao mild mosaic virus (CaMMV), was thought to only exist in Trinidad and Tobago. The virus is not believed to affect the cacao pod's flavor, but it can cause a mosaic pattern on infected pods that leads to the production of abnormally small pods, as well as the loss of entire branches. In 2019, ARS Research Plant Pathologist Alina Puig found CaMMV infecting cacao plants in Puerto Rico. In 2021, she confirmed the virus' presence in quarantined plants at the USDA-ARS quarantine greenhouse in Miami, Fla.

"We were able to do genetic analysis on the pathogen and figure out its survival characteristics, transmissibility and how it acts differently in certain locations," said Alina Puig. "Because of this research we can now target specific ways to interrupt the pathogen's transmission to other cacao plants." 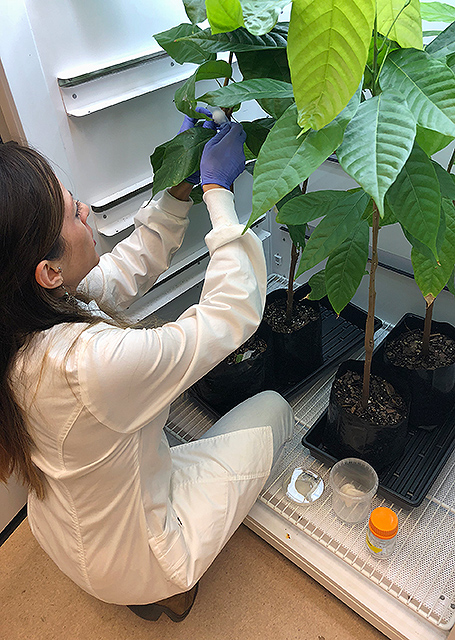 Dr. Puig developed a molecular test to detect the virus, which has stopped infected plants from being transported to other areas. Once the virus is detected, the infected plants are removed, quarantined, and used for further research. Cacao leaves from various regions are also being tested to determine the distribution of CaMMV in the Americas and whether or not the virus can be transmitted by seed.

Since both diseases can be present in the same geographical areas, ARS is currently researching the implications of possible interactions between black pod rot and CaMMV.  Specific attention will be given to symptoms of cross infected plants, initial visual identification of such infections, and whether infection with one disease makes the plant more susceptible to infection with the other.  Although diseases reduce the supply of cacao beans available for chocolate production, scientists are helping to minimize their impact by learning more about the organisms and developing tests to detect them.

ARS research teams in Miami, Fla., Hilo, Hawaii, Beltsville, Md., and Fort Detrick, Md., will continue to work with scientists and farmers throughout 2022 to solve this agricultural challenge and ensure the commercial viability of future cacao crops.