Skip to main content
ARS Home » News & Events » News Articles » Research News » 2022 » Can a Deluge Compensate for Losses in Productivity and Carbon Uptake During a Drought? 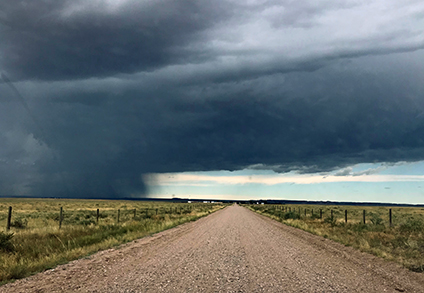 Can a Deluge Compensate for Losses in Productivity and Carbon Uptake During a Drought?

FORT COLLINS, Colo., Jan. 25, 2022 — USDA, Agricultural Research Service scientists at the Rangeland Resources & Systems Research in Ft. Collins, CO, are using rain shelters to experimentally examine the impacts of deluge during a drought on forage production and carbon cycling (release and intake of carbon) in a semi-arid grassland in eastern Colorado.

Producers across the country face the increasing threats of multiple climate extremes, which when combined, often have economic and ecological impacts worse than the same extremes in isolation. The Western states for example, are experiencing extended droughts, forcing land managers to adapt agricultural practices to reduce losses in productivity. Added to this challenge are an increase in the frequency and intensity of extreme rainfall events, or 'deluges.'

"While working on shortgrass, we noticed a lot of research on drought and rainfall in the Western states, but not enough on deluges, which is one of the key predictions with climate change — more extreme rainfall events are expected to happen, and could even happen during a drought," said Research Ecologist David Hoover.

In a study recently published in Global Change Biology, researchers measured the combined effects of two opposite extremes, a deluge during an extended drought, on green-up, end-of-season plant productivity, and carbon cycling using chambers to measure carbon fluxes.

Reduced carbon uptake in the soil, early plant senescence (deterioration), and a decline in forage production were observed with drought.

"When a deluge was added during drought, rapid changes were observed, including regreening of brown vegetation and a large pulse in carbon uptake within days. However, the positive effects of one deluge during drought were temporary, lasting about a month. Based on our observations, one deluge could only partially compensate for the loss of forage production with extended drought," explained Hoover.

More research is needed to know exactly how these weather extremes impact forage production, and livestock. Hoover will continue these studies at larger and longer scales, including working with a team of scientists at the Colorado State University, to determine the legacy these extreme compounded events leave on the plants and the soils to provide producers with information that can help them adapt management to multiple climate extremes.

The study was funded by USDA, National Institute of Food and Agriculture.