Washington, May 3, 2021—William Hart-Cooper, a research chemist with the U.S. Department of Agriculture’s Agricultural Research Service, today was named a finalist for a Samuel J. Heyman Service to America Medal as an Emerging Leader in recognition of his pioneering work developing a new class of disinfectants and packaging that protect human health and reduce environmental pollution.

The awards, also known as the "Sammies," are given each year to federal employees who have distinguished themselves by making people, the country and the world safer, healthier and stronger.

Hart-Cooper, with the Bioproducts Research Unit at the ARS Western Regional Research Center in Albany, California, is being recognized for his innovative new approach to formulating disinfectants and other products that provide long-term protection against pathogens and pests while dissolving into harmless components after disposal in water.

"William Hart-Cooper is doing important and pioneering work that will provide us with options to use bio-based products to the benefit of our environment," said ARS acting administrator Simon Liu. "His commitment to developing products based on green chemistry benefits society by safeguarding the food supply and by protecting human health."

For example, he developed a formulation as a hoof balm to protect cattle from digital dermatitis, a bacterial infection that causes lesions on their feet, which dissolves into harmless substances after going into wastewater. Digital dermatitis affects 70 percent of cattle operations and costs producers hundreds of dollars for every occurrence. 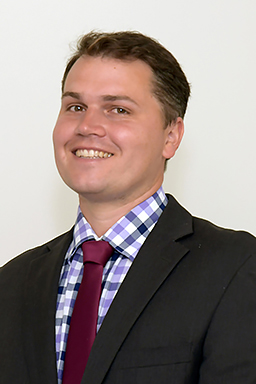 The underlying process developed by Hart-Cooper is called a reversible antimicrobial. Two harmless ingredients become potent when they are brought together to do a job such as killing bacteria and fungi or at least stopping their growth. When the disinfecting compound finishes its work and is dissolved in water, it comes apart and biodegrades.

With conventional antimicrobials, a very strong chemical bond is made, often between carbons atoms, and such chemicals stick around nearly forever. Hart-Cooper makes similar molecular bonds, except the bonds he creates easily fall apart at some set action like dilution, making them less environmentally hazardous, so these antimicrobials are benign by design.

For instance, by putting together high concentrations of cumin seed oil and an amino acid analogue—each relatively safe by themselves—the compound becomes a powerful antibiotic, Hart-Cooper explained. But when this antibiotic washes into the wastewater system, it gets diluted; the bond falls apart and the antibiotic reverts back to being two safe molecules.

Hart-Cooper also has developed, and with a commercial partner patented, a new type of packaging containing natural ingredients found in agricultural and food waste, such as coffee pulp, almond hulls and tree cuttings. When the discarded packaging enters the waste stream, it breaks down within days, which is hundreds of times faster than similar commercial packaging currently in use.

Hart-Cooper said he is driven by a desire to "create a framework in which we can clean up these chemicals and provide new strategies to show that something safer and better is possible. This is critical to keeping this planet safe and clean for the next generation."

In addition, the Samuel J. Heyman Service to America organization is offering a People’s Choice Award in which the public is encouraged to vote from May 2-July 2 for the finalists they believe are worthy of additional recognition.