We often cherish the small memories of summer and all the joy that those memories bring. Maybe those memories are framed with ocean breezes, laughter, good food and time well-spent with friends or family. Whatever your summer memories include, I’d like to think that the yellow-green flash of the firefly is somewhere on the list.

Did you spend the summer evenings of your youth capturing fireflies in a glass jar? Did you try to catch them in your hand? Did you ever wonder where these insects come from and why they are such a huge part of summer evenings? If so, this may be the perfect time to learn.

First, it’s worth noting that despite their common name, these insects are not flies. They are actually a part of the Lampyridae beetle family, and they appear in late May or early June, often disappearing around September. But that varies according to species, region, and local weather conditions. Some species also emerge earlier than others. Like all beetles, fireflies have a complete metamorphosis, meaning they develop from eggs, to larvae, to pupae, to adults. Fireflies can spend up to two years as larvae, while their lifespan as adults only lasts a few weeks.

Most people may find them flying around their yard, but fireflies prefer damp areas and you will often find them in meadows, woods, backyards or near sources of water. As they develop and grow, the larvae will eat other insect larvae, snails, and slugs. The adult diet is less well known, but research shows most adult fireflies don’t feed at all, and when they do, the diet can vary from species to species, but usually includes nectar, pollen, or other fireflies. 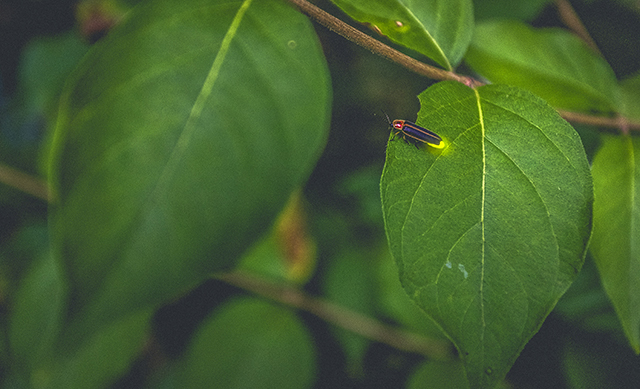 The light on an adult firefly is part of the mating process. (Maverick Dunavan, D4681-1)

During the day, nocturnal Lampyridae can be found resting on vegetation or tree trunks. Once evening falls, they begin mating behavior which results in the spectacular light show that we all know and love. During this time, the males will fly through the air and emit light from specialized organs on their abdomen to get the attention of the females.  If the female is interested, she’ll reply with a flash of her own, attracting the male towards her.  Each species has a specific flash pattern that differs in number, duration, and intervals between flashes.  After mating the female lays her eggs and the adults soon die.

Fireflies are actually considered a beneficial predator of garden pests, and sometimes, pollinators. Sometimes they are not quite hospitable to one another, as research shows that some female fireflies mimic the response of a different species to lure in a male firefly before eating him.  As everyone knows, fireflies won’t bite or sting you. So, it’s fine if they land on you while you enjoy a summer evening outdoors.

There are now more than 136 species of fireflies in the United States and Canada, but they are currently in decline due to loss of habitat, pesticides, and light pollution. Be sure to enjoy their light show as they move about your backyard and be sure to set them free if they’ve been captured in a jar or your hand.

We want them around for a long time.