Farmers, producers, and managers increasingly want to use soil health assessments to measure the level of desired properties in their soil, like soil aggregation, microbial activity, nutrient cycling, salinity, acidity, and organic matter. Generally, producers have to use several methods and indicators to measure many soil properties, and testing can become expensive.

Given that this knowledge can contribute to the decision-making of soil management practices for crop production, there is a need for an inexpensive and reliable test that can provide suitable data for measuring soil health, especially for nitrogen mineralization. Nitrogen mineralization is the amount of nitrogen that naturally becomes available from soil during a growing season, and knowing it can help farmers use less nitrogen fertilizer, still maintain crop yields, and reduce environmental degradation. Scientists are concentrating their efforts on identifying indicators and parameters for what makes a soil healthy, which can help producers to know if more practices could help them increase crop production while maintaining sustainable, healthy soil for generations to come. 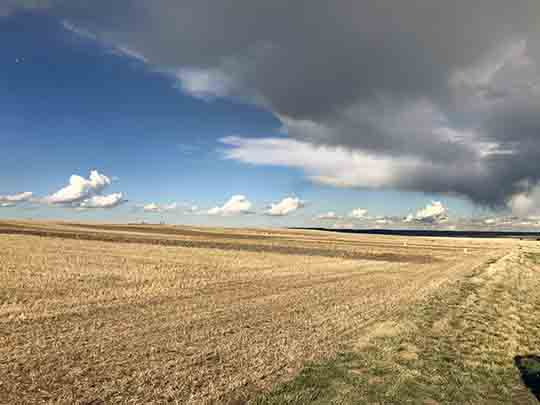 A view of the long-term experimental site in Froid, MT, where the experiment was conducted. Photo courtesy of Daniel Liptzin.

One soil health indicator that scientists had focused on is the measurement of the carbon dioxide gas released (flushed) after rewetting of dry soils. The method involves adding water to a sample of dry soil and incubating for one day in a jar.  The carbon dioxide released inside the jar during incubation indicates microbial activity in the soil. The higher the amount of carbon dioxide flush, the healthier the soil is.

In the study published in the Soil Science Society of America Journal, ARS research soil scientist Upendra M. Sainju and collaborators used this method on soil samples collected from two long-term experimental sites for dryland farming (14- 36-year-old sites in Eastern Montana), with the goal to identify a promising soil health indicator that relates to most soil properties and crop yields and is economical and easy to use by farmers. Samples were tested for carbon dioxide flush after 1-day incubation period using water and 4-day incubation period using an alkali solution and related to 54 different soil properties and the average crop production across years in dry regions. 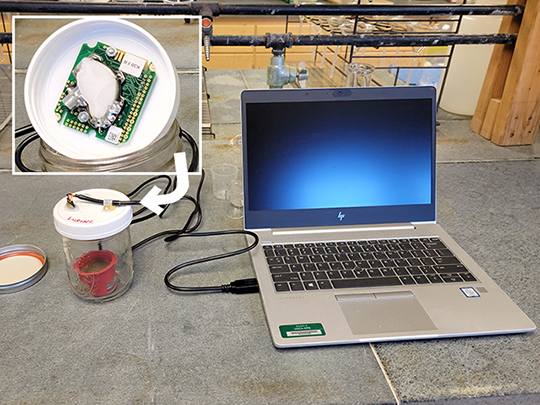 Infrared analyzer attached to the cover of the mason jar to absorb carbon dioxide flush, which is read in the laptop computer. Photo courtesy of Upendra Sainju

"Measuring soil health could be difficult for producers," said Sainju. "Our team was able to refine the 1-day incubation method to relate to most soil physical, chemical, biological, and biochemical properties when farming in semiarid conditions. After comparison, the 1-day incubation method was not only faster, but also accurate because it is connected to more soil properties and had a better relationship with crop production than the 4-day method. The shorter time required for incubation and mixing soil with water without the use of chemicals also make it more practical and cheaper for producers."

The team of scientists wants to continue validating this simple process for short-term experiments with different soils in both dryland and irrigated cropping systems and share the results with producers. "Knowledge is critical to maintaining healthy soils, which has a direct impact in yearly crop harvest, and requires a simple, easier, reliable, and inexpensive test to measure," said Sainju.