Parlier, Calif., Oct. 18, 2021 — One day, Yorizane may be synonymous with almonds and California. So what is a Yorizane and what does it have to do with almonds?

Yorizane is a new self-pollinating almond variety developed by USDA's Agricultural Research Service with superb consumer traits such as size, color, and flavor. But it is Yorizane's ability to produce an abundant harvest of nuts without needing to be pollinated by insects or having another almond variety planted in the same orchard—unlike almost all other commercial trees—that makes it so important to California's $6-billion-a-year almond industry.

Self-fertile almonds actually are not new, explained research geneticist Craig A. Ledbetter. He is with the ARS Crop Diseases, Pests and Genetics Research Unit in Parlier, California, and Yorizane's breeder.

A variety called Tuono, originally from Spain, has been around for centuries. But it has few of the other characteristics that have made California almonds so popular. The main problem is that, unlike California's quintessential almond variety Nonpareil, Tuono's outside seed coat has a hairy texture.

Still, Tuono is reliably self-pollinating, so it is not surprising that Ledbetter used it as the pollen-donating parent when he began breeding a new almond in 1996, crossing it with California-adapted almond cultivars and selections. 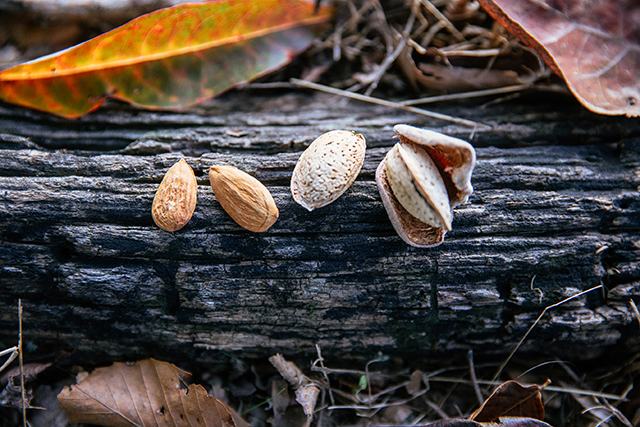 Yorizane, a self-pollinating almond developed by ARS-USDA, has outstanding flavor and an excellent crunch. Watch a video

One successful selection eventually came to be named Yorizane. It hit the genetic jackpot, getting Tuono's genes for self-fertility along with almost all of the traits of Nonpareil, the most planted almond tree since it was first introduced in the 1880s.

In 2019, the Almond Board of California tested more than 60 almond varieties from around the world for growth characteristics and consumer attributes including ease of harvest, ease of cracking, resistance to kernel damage, yield, bloom date, harvest date, and especially aroma, shape, texture, taste and color. Yorizane consistently scored near the top in almost every category, in the end, making it one of the best rated varieties.

"One of the things you really notice is that, once roasted, Yorizane almonds have the most audible crunch," Ledbetter said.

Small amounts of Yorizane budwood have been made available through Foundation Plant Services for research and breeding. Nurseries have been enthusiastic about reproducing Yorizane trees so that growers can start adding them to their orchards beginning in 2022.

But what is a Yorizane? Yorizane is the surname of the family that originally owned and raised stone fruit orchards on the 138 acres that became the ARS San Joaquin Valley Agricultural Sciences Center in 1991. The Center wanted to honor the generations of Yorizanes who maintained that land.