Helping farmers turn the tide on an emerging disease of corn called tar spot is the focus of a multi-organization team of scientists, including from the Agricultural Research Service (ARS) in West Lafayette, Indiana.

Caused by the fungus Phyllachora maydis, tar spot appears as black, roughly circular discolorations on the leaves, husks and stalks of corn plants. A tan halo sometimes surrounds the spore-filled spots, creating what's known as a fish-eye lesion. Outbreaks of the disease, which was first detected in northern Indiana and Illinois in 2015, can reduce grain yields by 20 to 60 bushels an acre. Tar spot is now also found in corn-growing areas of Iowa, Michigan, Minnesota, Missouri, Ohio, Pennsylvania, Wisconsin, Florida, and southwestern Ontario, Canada.

Although fungicides offer the hardest-hitting counterpunch, resistance to tar spot disease in corn is far more preferable, according to Steve Goodwin, a plant pathologist with the ARS Crop Production and Pest Control Research Unit in West Lafayette, IN. 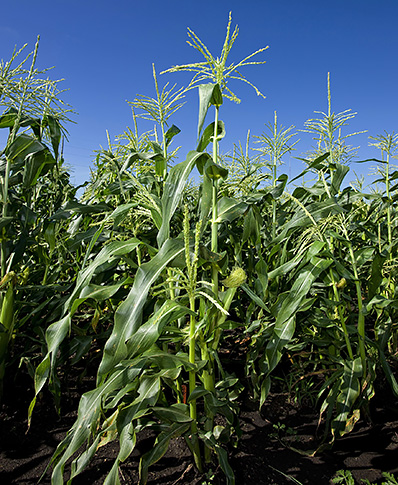 ARS and collaborating scientists have begun a multi-faceted fight against an emerging disease of corn called tar spot.

On other fronts, university collaborators are conducting research to optimize the timing of fungicide sprays and evaluating rotations of corn with non-host crops to reduce the disease's severity and prevent the fungus from surviving the winter on debris from prior corn harvests.

Researchers are also pouring through existing literature on the biology of the tar spot fungus and building on what's known about it with genomic sequencing—a kind of decoding of its DNA playbook for causing disease in corn. One hope is that this will yield clues to new ways of controlling the fungus and preempting costly outbreaks like the one from 2018 to 2020, which claimed an estimated 241 million bushels of U.S. corn.

The effort is being carried out under the auspices of the National Plant Disease Recovery System (NPDRS). Arising from a 2004 Homeland Security Presidential Directive, the NPDRS spotlights emerging plant disease threats and identifies what tools, infrastructure, communication networks and other resources will be necessary to protect U.S crops or recover from outbreaks that have already occurred.