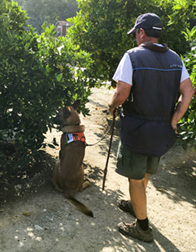 FORT PIERCE, Florida, Feb. 3, 2020—Dogs specially trained by Agricultural Research Service (ARS) scientists have proven to be the most efficient way to detect huanglongbing—also known as citrus greening—according to a paper just published in the Proceedings of the National Academy of Sciences.

Currently, the only solid hope of curtailing the spread of citrus greening is to eliminate trees with the disease as quickly as possible to prevent further spread. Early detection of the citrus greening pathogen is crucial because trees can be infected and act as a source to spread the disease months or years before showing symptoms that are detectable by the naked eye.

ARS plant epidemiologist Timothy R. Gottwald with the U.S. Horticultural Research Laboratory in Fort Pierce, Florida, discovered that dogs can be trained to sniff out the presence of Candidatus Liberibacter asiaticus, the bacteria that causes citrus greening, with greater than 99 percent accuracy.

"We found that, once trained, these dogs were able to identify infected trees within two weeks of the trees being inoculated," Gottwald said. "The dogs also were able to distinguish the citrus greening pathogen from a variety of other citrus bacterial, viral, fungal, and spiroplasma pathogens, including closely related Liberibacter species.

During testing, the citrus greening detector dogs had total of 4 to 15 false negatives and false positives on 950 to 1,000 trees per dog. Occasionally, the dogs alerted on clean trees that were in the same spot where an inoculated tree had been placed in previous tests due to residual scent.

In contrast, the only currently USDA-approved method for confirming the presence of the citrus greening pathogen—a DNA-based assay called a polymerase chain reaction (PCR) test detected less than 3 percent of infections at 2 months, 16 of 30 inoculated trees at 16 months, and 20 out of 30 in 17 months.

PCR tests also require considerable time, financial and human resources for sampling, processing and laboratory work. They are very expensive to use as a general surveillance tool.

The training is similar to that of explosives sniffing dogs, in which the dogs are taught to recognize a particular odor and to sit down next to the source once found. The dogs are rewarded with play time with a toy.  However training is more extensive and specific because the dogs are trained to detect a bacteria infecting a plant, and the two cannot be separated.

So far, Gottwald's program has trained 19 dogs obtained from European breeders of detection canines because of their keen abilities and drive.

"When we ran epidemiological models, we found canine detection combined with infected tree removal would allow the citrus industry to remain economically sustainable over a 10-year period, compared to using molecular assays or visual inspection combined with tree removal, which failed to suppress the spread of infection," Gottwald explained.

Citrus green sniffing dogs have been deployed for 9 months in California and northern Florida.

In the past decade, huanglongbing has caused more than 70 percent decline in the production of oranges for juice and the fresh fruit market in Florida and threatens other states, making it the largest economic threat to the $3.35 billion U.S. citrus industry. It was first found in the United States in 2005, citrus greening has spread to Florida, Texas, California, Georgia, and Louisiana.