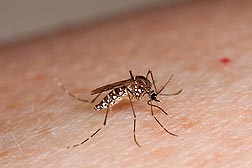 The mosquito Aedes aegypti can spread several diseases as it travels from person to person. Only the females feed on blood.

Add yet another use for cornstarch—besides thickening soups and gravies, making adhesives, soothing skin and removing stains.

Agricultural Research Service (ARS) scientists in Peoria, Illinois, are now using the versatile commodity to make products that can fight insect pests, prevent disease and decay and impart water resistance to surfaces. Underpinning that effort is the team's use of patented procedures for converting cornstarch into a new class of material known as amylose inclusion complex (AIC)—an advance aimed at increasing the commodity's value even more.

Products created from the AIC include emulsions using essential oils from garlic, asafoetida (a type of spice) and other plants to control mosquito larvae in aquatic habitats. The emulsions are toxic to mosquito larvae but not the environment, which makes them promising botanical alternatives to synthetic insecticides, noted one of the ARS scientists, Ephantus Muturi, who is with the National Center for Agricultural Utilization Research (NCAUR) in Peoria.

Muturi said the emulsions envelope droplets of the oils, stabilizing them and protecting them from extremes of heat or oxidation that can reduce their potency when applied to mosquito larvae habitats, like storm water catch basins and old tires. The emulsions also allow the oil droplets to disperse in water, contrary to their natural tendency. This, in turn, increases the likelihood of their contacting and killing the larvae, improving control of the young pests.

In laboratory trials, exposure to the essential oil emulsions killed the larvae of yellow fever mosquitoes (Aedes aegypti) in 24 hours. The number that died upon exposure was dependent on the type of oil and formulation used, noted Muturi, who reported the findings in the October 2019 issue of the journal Insects together with NCAUR colleagues William Hay, Robert Behle and Gordon Selling.

Ultimately, the team envisions using the essential oil emulsions as part of an integrated approach to controlling mosquitoes and preventing the diseases they can spread, such as West Nile virus, yellow fever, dengue and Zika.

On another front, Hay, Behle and their colleagues are examining cornstarch-based emulsions that could put the kibosh on wood-damaging termites and rot-causing fungi, including species that cause stored potato losses of up to 25 percent annually.

Other products include films and coatings that regulate gas exchange or impart water repellency to paper and other cellulosic materials, as well as glass. Like the emulsions, they too were derived from the AIC. Selling and ARS chemist George Fanta used current industrial techniques such as steam-jet cooking to produce the AIC from high-amylose cornstarch, fatty acid salts, and other biobased ingredients.

The team's efforts support a broader push at Peoria to develop new, value-added uses for Midwestern crops like corn that will help diminish the reliance on petroleum-based goods and the environmental "footprint" their use can leave behind.