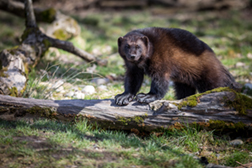 A new freeze-resistant Trichinella has been found in wolverines. Photo courtesy of Getty Images

BELTSVILLE, MARYLAND, May 6, 2020—A new freeze-resistant Trichinella species has been discovered in wolverines by Agricultural Research Service scientists and their colleagues. Trichinella are parasites that cause the disease trichinosis (formally referred to as trichinellosis), which people can get by eating raw or undercooked meat from infected animals.

Before the advent of modern biosafety practices, Americans risked infection from Trichinella spiralis from contaminated pork. Residual risk exists when consuming wild game infected with this, or other species of Trichinella.

Freezing pork for three days generally kills T. spiralis but will not kill freeze-resistant varieties endemic to the Arctic. This study indicates freeze-resistance in this newly discovered species.

This is the first species of Trichinella discovered since 2012, and the 13th species identified since the genus was discovered in 1835.

Wolverines, the largest member of the weasel family, are found mostly in northern Canada, Alaska, Nordic countries in Europe and throughout western Russia and Siberia.

"They make an excellent sentinel species to help us understand the scope of Trichinella in the environment," said ARS research zoologist Peter Thompson who led the study. "A wolverine can have a home range of about 1,000 miles and will eat just about anything it can kill or scavenge, including caribou, moose, ground squirrels and other rodents as well as carnivores such as foxes and even other wolverines." Thompson is with the ARS Animal Parasitic Diseases Laboratory in Beltsville, Maryland.

When the researchers first saw the new freeze-resistant Trichinella, they sought to understand if there had been interbreeding between T. nativa and T6, another freeze-resistant variety that is closely related to T. nativa.

By sequencing the newly discovered Trichinella species' complete genome, it was shown that its DNA is about 10 percent different from any other Trichinella. By comparison, human and chimpanzee DNA only differ by 1 percent.

"Evolutionarily, the evidence shows that Trichinella chanchalensis split off from the other known Trichinella species about 6 million years ago, making it a very old species among Trichinella," Thompson said. "That brings up the question of how T. nativa and T6 got their freeze resistance. Did the trait evolve more than once or is there some other mechanism at work?"

The ARS Animal Parasitic Diseases Laboratory, which is part of the Beltsville Agricultural Research Center, has a long history of helping provide the scientific basis for regulations that in the past ensured cured and cooked pork products were safe and reliable. Some of the lab's accomplishments include: