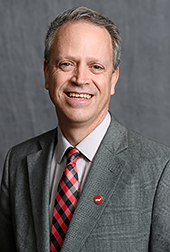 August 12, 2020—"How the Christmas Flower Came to Be" is the title of John M. Dole's 2020 Agricultural Research Service Benjamin Y. Morrison Memorial Lecture, being presented virtually at the American Society for Horticultural Science's annual meeting on Wednesday, August 12.

Dole is the associate dean and director of academic programs for the College of Agriculture and Life Sciences at North Carolina State University. He also is currently executive advisor to the Association of Specialty Cut Flower Growers, a 1,600-member national organization devoted to the production and utilization of cut flowers.

Poinsettias are a case study on the forces behind crop development that took a gangly shrub to one of the most important plants in the world, according to Dole. The story of the poinsettia's rise is a fascinating mix of plant exploration, horticultural research, and marketing illustrating the strengths of industry, universities and the U.S. Department of Agriculture.

Dole has an international reputation for his significant research in floricultural crop production and postharvest handling and use of cut flowers, cuttings, and poinsettias, as well as his contributions to teaching, extension, and outreach in the field of floriculture.

He is one of the founding members of Seed Your Future, whose mission is to promote horticulture and inspire people to pursue careers working with plants. This public-private partnership between universities, the American Society for Horticultural Science, and Longwood Gardens has grown to become a full-fledged national movement and organization.

Dole has authored or co-authored more than 100 peer-reviewed journal articles, more than 300 industry publications, and 7 books, including the floriculture textbook Floriculture Principles and Species.

Among his honors and awards are the Alex Laurie Award from the Society of American Florists, Fellow of the American Society for Horticultural Science (ASHS) and president of ASHS (2016-2017).

The B.Y. Morrison Lecture was established in 1968 by the Agricultural Research Service to honor the memory of Benjamin Y. Morrison (1891-1966) and to recognize scientists who have made outstanding contributions to ornamental horticulture and other environmental sciences, to encourage the wide application of these sciences, and to stress the urgency of preserving and enhancing natural beauty.

Benjamin Y. Morrison (1891-1966) was a pioneer in horticulture and the first director of the U.S. National Arboretum in Washington, DC. A scientist, landscape architect, plant explorer, author, and lecturer, Morrison advanced the science of botany in the United States and fostered broad international exchange of ornamental plants. More information about the Lecture is available at www.ars.usda.gov/research/lectures/morrison.