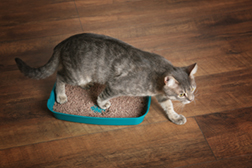 A new biobased kitty litter from Agricultural Research Service (ARS) scientists could be coming to a box near you—your cat's, that is.

Vaughn's group at ARS' National Center for Agricultural Utilization Research (NCAUR) in Peoria, Illinois, are always on the lookout for new, value-added uses for agricultural commodities, including forestry products.

Vaughn said that when they learned of pet owner concerns over the potential for cats to ingest some of the bentonite clay used in traditional litters, they looked for alternative materials to use, along with ways to reduce dust particles.

In previous work, the researchers had experimented with litters made of dried distiller's grains, a byproduct of corn ethanol production. This time, however, they decided to investigate the use of flakes from reclaimed eastern red cedar, whose fibers are highly absorbent and currently used in some commercial biobased cat litters.

The wood also contains flea- and tick-repelling compounds called bioactive sesquiterpenes. However, Vaughn's group saw room for improvement—namely, in getting the flakes to properly clump together and reduce the offensive odor of cat urine.

To achieve the latter, the researchers used a procedure called pyrolysis to convert some of the flakes into biochar. It's a carbon-rich, highly porous charcoal-like substance with an affinity for capturing volatile organic compounds, including 3-mercapto-3-methylbutan-1-ol (MMB), the chief odor compound in cat urine (but an important territorial marker for the felines).

Mindful of the dust that can accompany biochar use, the researchers lightly coated the material with food-grade mineral oil and glycerol. Their market research also showed that cat owners prefer litter formulations in which 60 percent or more of the material clumps together for easier scooping and disposal. So, they mixed in guar gum, a common food-processing and binding agent.

In trials using a variety of analytical procedures, the resulting litter formulation compared as well as or better than several commercial biobased products that the researchers used. This was especially true of tests that measured reductions in dust particles of 10 microns or smaller, which have shown toxicity to mammalian cells in culture, according to Vaughn.

He added that there were virtually no traces of MMB in the airspace immediately above litter boxes containing the experimental litter, thanks to the biochar's capture of the compound.  The highest all-around marks, though, went to yet another biobased litter formulation that the team had devised in previous studies—but is withholding specific details on until a patent can be secured.

Meanwhile, the researchers have submitted a paper to the journal of Industrial Crops and Products describing their use of biochar in litter made of eastern red cedar flakes. They also seek an industrial partner to further explore the commercial potential of their biobased cat litter formulations, potentially opening the door to greater use of agricultural commodities in a global pet-care market valued at $269 billion in 2019.