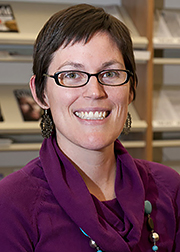 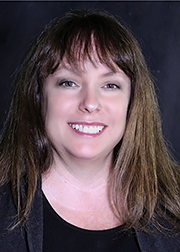 WASHINGTON DC, June 9, 2020—Heather Allen and Jo Anne Crouch, both scientists with the Agricultural Research Service (ARS), have received the 2019 Arthur S. Flemming Award for their outstanding scientific achievements in the fields of antimicrobial resistance and plant health, respectively.

They were among 13 total award recipients from across the federal government who were to be honored today during a recognition ceremony hosted by George Washington University (GWU). However, that ceremony has been cancelled due to the impacts of COVID-19. Together with the Arthur S. Flemming Awards Commission, GWU's Trachtenberg School of Public Policy and Public Administration presents the awards annually in recognition of the outstanding achievements of Federal employees with three to 15 years of service.

"We're honored to announce that, for the second year running, two of our researchers received this prestigious award. It's also with sadness we note Dr. Allen received the Flemming award posthumously," said ARS Administrator Chavonda Jacobs-Young. "Both she and Dr. Crouch embody the ARS commitment to putting the best and brightest minds to work tackling today's most pressing agricultural and food challenges."

Allen, who passed away on March 7, conducted pioneering research on the sources, prevalence and dynamics of antibiotic resistance genes in the swine gut microbiome—namely, the community of bacteria, viruses, bacteriophages and other microorganisms that inhabit the animal's intestinal tract. Allen's findings filled critical knowledge gaps about the swine gut microbiome and helped inform regulatory policies guiding agricultural practices to counter antibiotic resistance in both animal and human pathogens.

Among her accomplishments, Allen showed that bacteriophages (viruses which infect bacteria) can play a key role enabling the exchange of antibiotic-resistance genes among gut bacteria when certain in-feed antibiotics are administered to pigs. Her findings expanded the understanding of how antibiotic resistance develops in bacteria associated with food-producing animals including bacteria of clinical importance like Salmonella enterica serovar Typhimurium, a leading cause of foodborne illness in humans.

Allen's cutting-edge investigations also set the stage for discovering beneficial bacteria in the intestinal tract of swine. An example is Allen and colleagues' discovery of 15 different types of bacteria in swine that make butyrate, a fatty acid that promotes gut health. Their development of an automated screening procedure, using high-throughput sequencing, and specialized DNA probes to characterize the bacteria and their butyrate-encoding genes contributed to improvements in pre- and probiotic formulations made by commercial feed companies.

Crouch was recognized for her excellence in establishing a comprehensive research program on the causal agents of emerging plant diseases, particularly fungi and oomycetes, fungus-like organisms also known as "water molds."

Crouch took an "outside the box" approach to determining the evolutionary relationships, host range, genetic diversity and other characteristics of the pathogens that challenged what science thought it already knew about them. She also led the use of advanced molecular techniques to not only detect and describe fungal and oomycete pathogens, but also mitigate the harm they inflict on cereal and specialty crops, as well as turf grasses.

Among her notable achievements, Crouch discovered that "dollar spot"—the costliest disease of turfgrass worldwide—is caused by four unique fungal species rather than a single pathogen, solving a puzzle that had eluded plant pathologists for 83 years prior to her molecular systematics studies and datasets. Crouch's overturning of long-held views on the cause of downy mildew in black-eyed Susan and impatiens opened the door to developing resistant cultivars of these specialty crops, valued at nearly $10 million (2014) and $131 million (2018), respectively.

Additionally, her use of preserved specimens from the ARS-administered U.S. National Fungus Collection for molecular studies of fungal and oomycete pathogens is a rarely used but productive approach for investigating sources of crop disease outbreaks. To date, there are only a few publications that discuss research conducted with these types of samples.

Flemming awards are presented to winners in one of five categories. Allen was recognized in the Basic Science category, while Crouch was honored in the Applied Science and Engineering category.