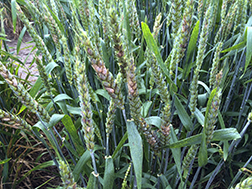 A national U.S. Department of Agriculture (USDA) survey, published recently in Plant Disease, provides the first large-scale, systematic insight into how wheat and barley growers manage Fusarium head blight (FHB), also known as scab, and where they get information on how to control this destructive disease.

FHB can reduce a farmer's yield and affect quality, lowering the price of the grain. Also, the Fusarium fungus produces a mycotoxin called deoxynivalenol or DON. Wheat with DON levels above 2 parts per million is unacceptable for human consumption.  FHB can also wreak havoc with barley crops, as maltsters have a near-zero tolerance for Fusarium.

The survey, funded by the USDA Agricultural Research Service (ARS)-led U.S. Wheat and Barley Scab Initiative includes data from more than 5,100 wheat and barley growers in 17 states. It details how grain producers perceive FHB, where they get their information, which management tools they use and problems managing the disease.

Fusarium has a very wide host range, said Christina Cowger, small grains pathologist with ARS Plant Science Research Unit in Raleigh, North Carolina. "Think of it as an omnivore in the sense that it doesn't specialize just on one crop, but rather it is a pathogen of wheat, barley, oats, corn—any grain crop.  It can infect a lot of plant species and consequently, build up a lot of fungus in the environment."

Weather is the main variable in determining an FHB epidemic. Once a crop is harvested, Fusarium rests in the field's debris.  When a new small-grain crop is planted, and if rain occurs two weeks before plants flower, the fungus releases its spores, which land on the new crop's flowering heads and cause infection.

Techniques for minimizing FHB in wheat and barley are well-established and available, Cowger said. They include moderately FHB-resistant cultivars, monitoring of weather-driven risk, and timely use of the most effective fungicides, called demethylation inhibitors (DMIs) or triazoles.

The survey showed that farmers in the Upper Midwest use FHB-resistant varieties to a much greater extent than growers in the eastern U.S., who have still not widely adopted them.  FHB first emerged as a serious problem in the upper Midwest—North Dakota and Minnesota—where it caused major damage in the 90s.  In the last 20 years, it has spread throughout the eastern wheat producing region, occurring in Georgia, New York, Kentucky and other soft wheat states.

Surprisingly, most respondents said they had not had a problem with FHB either in terms of reduced yield or the toxin in the 5 years prior to this survey, Cowger said. Even though there is a significant and economically damaging epidemic somewhere in the United States every year, causing huge headaches for end-users of grain, it's not happening everywhere every year.  This makes FHB management a special challenge:  routine planting of FHB-resistant varieties is the single best protective measure, yet the disease tends to slide off growers' radar if it hasn't struck recently.

Another important finding was that farmers get disease and management information from two top sources—crop advisors/private consultants and Extension agents.  Since the survey, steps have already been taken by the USDA-ARS led Wheat and Barley Scab Initiative to ensure crop advisors are receiving the latest and best research information on FHB management.