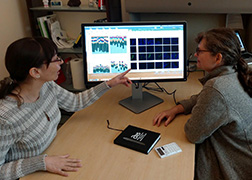 Like humans, rhesus macaques—a well-known species of Old-World monkeys—suffer from gastrointestinal diseases of unknown cause. Medical treatments such as antibiotics have not been able to solve this problem, and no single causative pathogen has been identified. This disease shares many similarities with ulcerative colitis in humans, which affects the large intestine.

Unlike humans in a hospital, monkeys who arrive in a medical wing are all on the same diet as their healthy counterparts. This makes it easier to study how gut microbes differently respond to the same diet in health and disease, said Lemay, who began her research on idiopathic chronic diarrhea in monkeys while working at the University of California-Davis. Collaborating with UC-Davis pathobiologist and veterinarian Amir Ardeshir and others, she used a new method called SAMSA2, developed by her research team, to observe all genes expressed by all organisms—bacteria, fungi, protists, etc.—in fecal samples from healthy monkeys and monkeys with chronic diarrhea.

The study, published recently in Microbiome, showed how two bacteria interact to produce a bad outcome. Lemay found that bacteria believed to be "good" were cross-feeding fucose—a sugar—to bacteria that may not be so good.

This would not be detectable with standard culture-based systems, whose limited testing look only for one bacterium as the culprit in a syndrome or disease, she said. With the team’s SAMSA2 software, they were able to identify which genes were being expressed in the colon of diseased and healthy monkeys.

Another critical discovery was that the identity of a particular bacterium is not as important as what it is doing in the gut. For example, the pathogen Campylobacter was found in both groups, but in animals with disease, the pathogen expressed a gene that allowed it to attach to the mucin layer. In healthy animals, Campylobacter may just be passing through, Lemay said.

The study showed that chronic diarrhea in rhesus macaques is associated with increased gene expression by pathogens, increased mucin degradation and altered fucose utilization, Lemay said. These findings could have implications for chronic gastrointestinal disease, such as ulcerative colitis, that affect humans.