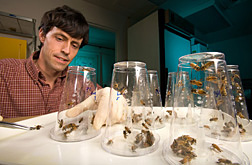 There is currently no treatment for this parasite.

The scientists found that feeding honey bees a small amount of an interfering RNA compound (RNAi) could disrupt the reproduction of N. cerana by as much as 90 percent in the laboratory study, according to a study recently published in Insect Molecular Biology.

“Dicer is a critical part of Nosema ceranae’s machinery for defeating honey bees’ immune responses to infestation by these parasites. It also encodes an essential protein in N. ceranae’s reproduction. So, it could be a double-barreled, practical route for attacking N. ceranae. Even better, RNAi against Dicer is specific to the parasite and will not interfere with the health of the honey bees,” Evans said.

In earlier studies, the lab had looked at attacking N. ceranea genes that encodes for proteins that make N. ceranae a better parasite such as a polar tube protein that is important in the invasion of bee cells by the parasite.

“But by striking at a single gene that affects N. ceranae reproduction and the ability of this parasite to counter honey bee immunity, I think we may have found an even better—an excellent avenue of attack,” Evans added.

But this is just the first step toward a possible treatment. The researchers need to prove the concept in the field and beekeepers’ apiaries.

Nosema ceranae is widespread problem of honey bees, although the impacts on colony health remain unclear. The best measure of the damage of Nosema comes from Europe where this parasite has been linked to long-term colony declines in Spain.

A chemical treatment had been available, but it was taken off the market due to production challenges.