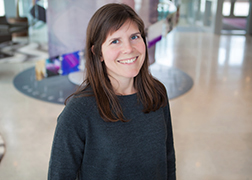 WASHINGTON D.C. January 30, 2019—Agricultural Research Service (ARS) molecular biologist, Elizabeth Ainsworth, is receiving the National Academy of Science’s (NAS) Prize in Food and Agriculture Sciences. Ainsworth will be recognized for her groundbreaking research to show how crops such as corn and soybeans are affected by increases in atmospheric carbon dioxide and ozone in combination with drought and other environmental stresses, along with potential solutions.

Ainsworth works at the Global Change and Photosynthesis Research Unit in Urbana, Illinois, and is a lead investigator of SoyFACE Global Change Research (Soybean Free Air Concentration Enrichment) Facility.  This facility focuses on providing solutions to the question of how to feed the world in the face of global climate change. SoyFACE involves testing plants in open-air field conditions under atmospheric conditions predicted for the year 2050 and beyond. At that time, carbon dioxide concentrations are expected to be 35 percent higher than today’s concentrations.

“Dr. Ainsworth is an outstanding ARS scientist. Her work to help protect the future of crop production in corn and soybeans in the face of global climate change is important to the United States, and the world,” said ARS Administrator Dr. Chavonda Jacobs-Young. “I am proud and grateful for Dr. Ainsworth’s scientific accomplishments for ARS.”

Ainsworth’s scientific focus is to identify and utilize genetic variation within crop species to better adapt them for future environmental conditions. Her research efforts include measuring crop responses to global climate changes from the molecular to the agronomic scale and determining the genetic underpinnings of those varieties that are more tolerant of higher concentrations of atmospheric ozone and more responsive to higher carbon dioxide.

According to her and her collaborator’s studies, exposure to ozone pollution over the past 30 years has reduced corn yields by about 10 percent and soybean yields by about 5 percent. They also found significant differences in ozone tolerance among the varieties. This shows the potential for breeding more ozone-tolerant varieties.