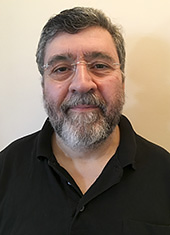 Established in 1986 to honor Salmon, the first director of the USDA’s Bureau of Animal Industry, the award is presented annually to a veterinarian in recognition of outstanding contributions and notable service in the public’s interest.

A veterinary surgeon, Salmon earned the first Doctor of Veterinary Medicine (DVM) degree awarded in the United States and spent his career studying animal diseases. He gave his name to the bacterial genus Salmonella, which was discovered by an assistant and named in Salmon’s honor.

CSF and ASF are highly contagious and often deadly to domestic and wild swine. Both diseases remain a significant threat to swine industries worldwide, especially to disease-free countries like the United States. As a lead scientist in the Foreign Animal Disease Unit at Plum Island Animal Disease Center (PIADC) in Orient Point, New York, Borca coordinates team efforts in developing adequate prevention and control measures to the ever-growing threat of CSF and ASF in the United States.

Vaccines for CSF are available, but new, improved vaccines are sorely needed. Over the past 20 years, Borca and his team have made significant progress in understanding CSF virus genome to develop new vaccines, called DIVA—differentiating infected from vaccinated animals—a critical feature used during disease outbreak efforts. The team identified more than 80 percent of all viral genes involved in causing CSF disease. Borca’s team has used this information to produce and patent 10 attenuated CSF virus strains that are potential vaccine candidates.

There is no vaccine to prevent ASF. However, Borca has made critical contributions to developing ASF vaccines. Once restricted only to Africa, ASF was reported in the Republic of Georgia in 2007 and has since spread to Russia, Eastern Europe, and most recently to China—the largest pork producer in the world. Borca has developed three ASF vaccine candidates, using technology he and PIADC fellow scientists developed earlier that allows them to genetically modify ASF viruses. These vaccine candidates, along with one developed by colleagues in Barcelona, Spain, are the only reported experimental vaccine strains that have been shown to prevent disease caused by the strain now circulating in Europe and Asia.

Borca, who said he was honored and happy to receive the award, was also recognized for his work on foot-and-mouth disease, another highly contagious disease that threatens animal production throughout the world.