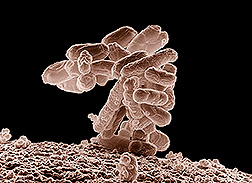 Low-temperature electron micrograph of a cluster of E. coli bacteria. Each individual bacterium is oblong shaped.

ARS Scientists Are Working to Ensure Safe Waterways in Georgia

ATHENS, June 8, 2018—Scientists with USDA’s Agricultural Research Service (ARS) are developing ways to identify the sources of any potentially harmful bacteria found in the surface waters around Athens, Georgia.

The effort is part of an ongoing project to ensure the quality of the area’s waterways, according to Jonathan Frye, an ARS microbiologist in Athens. Volunteers have been collecting water in the Upper Oconee Watershed for more than 20 years and the samples have been providing helpful data for years now to Frye and his colleagues.

ARS scientists and their colleagues at the University of Georgia recently found 496 different types or strains of E. coli in 458 water samples collected from the watershed over 2 years. Among those, they found 34 E. coli isolates with resistance to some antimicrobial drugs.

When the 34 isolates were further analyzed as part of a study, they showed the presence of a wide variety of strains of E. coli commonly found in surface waters. This included one sample with E. coli ST131, a pathogenic strain of bacteria that can cause urinary tract infections, is found worldwide and may sometimes carry genes associated with antimicrobial resistance to various pharmaceutical drugs.

Frye emphasized that the presence of the pathogenic strain should not alarm anyone concerned about the quality of the area’s drinking water. The chlorine and ultraviolet light used to disinfect drinking water will kill it along with any other harmful bacteria, he said. “We found something we didn’t expect, which is interesting and we will follow up on it, but it’s not a threat to public health,” Frye said.

The research was conducted by Sohyun Cho, a PhD candidate at University of Georgia, under Frye’s supervision with help from Charlene Jackson, and technical assistance from Anh Nguyen and Lari Hiott. The study was funded by ARS and the Centers for Disease Control and Prevention (CDC).

Cho presented the work as a poster today at the American Society for Microbiology (ASM) Microbe 2018 conference in Atlanta, Georgia.

Frye said he and other ARS scientists are now working with partners at the CDC and the Food and Drug Administration to develop ways to track the sources of E. coli and other pathogenic bacteria found in the Upper Oconee Watershed and other watersheds like it.

“We want to do everything we can to ensure that our drinking water and our waterways are as safe as they can be,” Frye said.