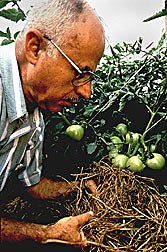 Scientist examines tomatoes grown with hairy vetch as a legume cover crop. Click the image for more information about it.

Based on a five-year sustainable agriculture study, the results are published in the current issue of the Proceedings of the National Academy of Sciences. ARS is the U.S. Department of Agriculture's chief scientific research agency.

The scientists showed that at least 10 genes in the leaves of tomatoes grown in the sustainable system were turned on longer, or "over-expressed," allowing those tomatoes to live longer than tomatoes grown on the plastic mulch. These "over-expressed" genes may respond to signals emanating from the specific ratio of nitrogen, carbon and other elements provided by the cover crop.

The researchers compared the two tomato cultivation systems at the ARS Henry A. Wallace Beltsville (Md.) Agricultural Research Center. In one system, tomatoes were grown under the traditional method of black polyethylene mulch with chemical fertilizer, a common planting regimen in the Middle Atlantic and Southeastern states.

In the other planting system, the scientists grew tomatoes in the sustainable system, in which the plants received half the chemical fertilizer and fungicide applied in the traditional system. The sustainable system relied on hairy vetch--a nitrogen-fixing legume cover crop--to provide soil nutrients and some natural leaf disease protection.

The scientists also believe the cover crop allows the tomato root system to produce increased levels of cytokinins, a class of plant hormones that delay senescence and let the plant live longer.

With the genes identified that impart disease tolerance and longevity, researchers may be able to use that knowledge to breed plants that are even more highly responsive to sustainable production systems.