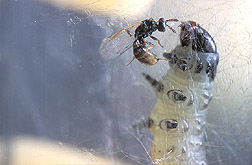 The parasitic wasp Colpoclypeus florus attempts to sting a larva of the oblique-banded leafroller.  Click the image for additional information about it.

Agricultural Research Service scientists and cooperators are plotting a war of the roses against apple leafrollers that plague fruit orchards.

After mating, a female C. florus wasp crawls inside the cocoon that envelops the apple leafroller's caterpillar stage and deposits about 20 eggs. Several days later, her maggot-like brood emerge to suck fluids from the caterpillar, killing it. During the spring, the scientists observed, only a small percentage of an orchard's apple leafroller population is affected by such attacks. But during the summer, C. florus can thin the pest's ranks by more than 50 percent.

Since 1999, ARS entomologists Tom Unruh and Robert Pfannenstiel and WSU colleague Jay Brunner have sought to overcome the wasp's springtime lag using "habitat modification." The approach involves planting gardens of wild rose and strawberry as a refuge for a secondary host of C. florus called the strawberry leafroller. This doesn't introduce a new caterpillar threat to orchards, but rather provides the wasp's brood with a host of a suitable size that's critical to their winter survival.

The result is a bumper crop of new wasps emerging in the spring to mate, migrate into orchards and attack their primary hosts, Pandemis pyrusana and the oblique-banded leafroller. Both are pests of apples, pears and cherries.

In heavily infested areas, apple growers may spray orchards with insecticide two to four times a season to keep these caterpillar pests from damaging fruit. But making the orchards more hospitable to the wasps in the spring could diminish the need for spraying, according to Unruh, at the ARS Tree Fruit and Vegetable Insects Research Unit, Wapato, Wash.

A longer article about the gardens, now being field-tested in Washington and Oregon, appears in the January issue of Agricultural Research magazine.