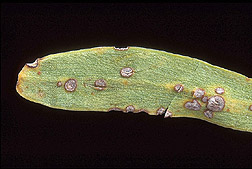 Fungal spots on a protea leaf. Click the image for more information about it.

By hitching a ride on plants, fruits and other agricultural materials, potentially harmful fungi from around the globe can enter the United States--and maybe even reach your backyard. But a cadre of scientists with the Agricultural Research Service is standing close by, ready to help the experts identify these fungal intruders.

Amy Y. Rossman and other ARS mycologists at the agency's Systematic Botany and Mycology Laboratory (SBML) in Beltsville, Md., provide support to other U.S. Department of Agriculture scientists who are charged with identifying suspect fungi intercepted during inspection at U.S. ports.

The reason for such vigilance? Some fungi have the potential, if left unchecked, to cost American agriculture and horticulture industries millions of dollars in damage control. Eight years ago, a mystery fungus on wheat plants nearly froze U.S. exports of the crop, until ARS researchers discovered that the organism was just a lookalike of the more serious Karnal bunt fungus.

Mary E. Palm, national mycologist for USDA's Animal and Plant Health Inspection Service, is the point person for suspicious fungi that elude identifiers at the country's borders. She is based at the ARS laboratory in Beltsville for access to its top-notch mycologists, fungal collections and databases. The U.S. National Fungus Collections, part of SBML, are the largest reference collection of fungi in the world.

Currently, fungi found on flowers of the family Proteaceae are a focus of Palm and her ARS colleagues. Striking and colorful, proteas are a fast-growing enterprise for the U.S. cut flower industry and for small growers in South Africa and Australia, where the flowers are indigenous. The USDA experts, through their identifications and descriptions of protea fungi, are helping to facilitate the flow of safe and usable plants between countries.

Read more about the research in the March issue of Agricultural Research magazine.