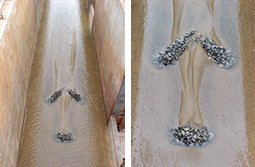 Modeling the creation of islands in a stream: Within a 6-foot-wide flume, sediment accumulates behind a V-shaped rock formation and the barrier upstream of it. Images courtesy Dr. Paul R. Weckler, Oklahoma State University.

The interior least tern (Sterna antillarum), an endangered species that nests on sandbars within rivers, may get a boost from a cooperative effort between students at Oklahoma State University (OSU) and scientists with the Agricultural Research Service.

Three seniors in OSU's Department of Biosystems and Agricultural Engineering sought to increase nesting habitats for these birds by tweaking river flow so that it would steer sediment to form new, small islands. The students---Mary Crawford, Matthew Simpson and Scott Schneider--used computers to portray how stone formations and other structures could help produce this effect.

To field-test their theory, they looked to the ARS Hydraulic Engineering Research Unit in Stillwater, Okla. The unit is recognized worldwide for modeling, designing and engineering hydraulic structures. Using scale models, its researchers can create for study a multitude of erosion and bridge- and dam-stress scenarios.

The OSU students--aided by ARS researchers Sherry Britton, a hydraulic engineer, and Kem Kadavy, an agricultural engineer--used the facility's 6-foot-wide flume to find the best formations that would create the islands. The flume has a scale of about 1:100 in comparison to large rivers.

They found that an inverted "V" shape with a barrier behind it worked best at slowing flow enough to trap sediment and eventually create an island. According to OSU assistant professor Paul Weckler, who oversaw the project, this design is being considered for inclusion in upcoming improvements that Tulsa, Okla., will make to the Arkansas River, a major nesting site for the interior least tern.

The class project was initiated by the U.S. Army Corps of Engineers' Tulsa district office.

Once abundant, interior least terns were spotted frequently by Lewis and Clark during their 1804 expedition. But their numbers dropped, first due to a demand for their skins for women's hats in the 1890s, and later because of damming and channelization of waterways.