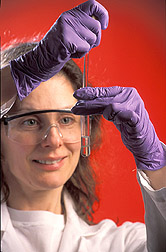 Nutritional biochemist Elizabeth Johnson extracts lipids from blood plasma to test for carotenoids. Click the image for more information about it.

Absorbing News About Eggs and Lutein

The human body is better able to absorb eye-healthy lutein from eggs than from other dietary sources of the carotenoid, according to a study funded by the Agricultural Research Service and the Egg Nutrition Center in Washington, D.C.

Lead nutritional biochemist Elizabeth J. Johnson and colleagues with the Carotenoids and Health Laboratory at the Jean Mayer USDA Human Nutrition Research Center on Aging at Tufts University in Boston, Mass., conducted the study. The findings are reported in the August issue of the Journal of Nutrition.

The researchers suspect that lutein from eggs is more readily absorbed into the bloodstream than lutein from other sources because of components in the egg's yolk, such as lecithin.

Low lutein intake is implicated as a risk factor in age-related macular degeneration, the leading cause of vision loss among older Americans. In the eye, the macula is in the retina, directly behind the pupil, and is responsible for central vision. Lutein and a related dietary carotenoid, zeaxanthin, accumulate within the macula and imbue a yellow pigment that helps protect the eye.

Ten volunteers, during four separate test phases, consumed either cooked spinach, eggs or one of two types of lutein supplements. Each source provided 6 milligrams (mg) of lutein per daily dose. Johnson measured lutein concentrations in the volunteers' blood serum before and after each test phase. When each volunteer ate eggs as the source of lutein, their lutein blood serum levels were about three times greater than after consuming the same dose of lutein from the other sources.

Federal surveys report the average American consumes only about two mg of lutein daily, but a salad of one egg and one cup of spinach would easily double that by providing the equivalent of about four milligrams of lutein.

The new findings suggest eggs are an inexpensive source of highly bioavailable lutein, though more than one egg per day would provide higher-than-recommended amounts of dietary cholesterol.