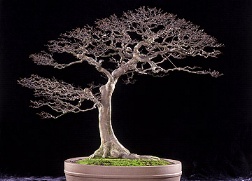 Renovations to Bonsai Museum Under Way

The National Bonsai and Penjing Museum at the U.S. National Arboretum in Washington, D.C., is officially closed while undergoing a $1.3-million renovation. Bonsai enthusiasts will find the collection’s setting nicely enhanced when it reopens in the spring of 2002.

Arboretum Director Thomas S. Elias explained that renovations to the courtyard area will make it handicapped-accessible. The current narrow, gravel pathways will be replaced with hard, wheel-friendly surfaces. Crews will install an automated irrigation system and lighting for nighttime events, and will repair grading and drainage problems. The improvements are funded by the Agricultural Research Service, the federal agency that administers the Arboretum, and the National Bonsai Foundation, which donated more than $250,000 to enhance the collection. ARS is the chief scientific research agency of the U.S. Department of Agriculture.

Bonsai is an ancient horticultural technique that dwarfs trees by manipulating limbs and cutting branches to keep the tree from growing to a full size. Trimming of the tree’s roots every two to three years restricts its size, but does not harm the tree’s health. Despite their miniature status, bonsai produce full-size flowers and fruit. One of the specimens in the Arboretum collection, a California redwood, is only about two feet tall, although in nature these trees normally grow to more than 300 feet.

The Arboretum’s bonsai collection began in 1976 with a bicentennial celebration gift from the people of Japan and now includes about 150 plants. Since the inception of the collection, the Arboretum has become the conservator of bonsai gifts made to U.S. presidents, beginning with one presented to Richard M. Nixon. The oldest tree in the collection, a Japanese white pine, is 375 years old and survived the nuclear bombs dropped on Japan more than 50 years ago. It was tended by a single family for six generations before it became part of the collection. The exhibit also features younger bonsai of American trees such as spruce and maple.

Although the bonsai collection will not be available for viewing until the spring, visitors to the Arboretum can still enjoy the facility’s 446 acres of national and international plant specimens.