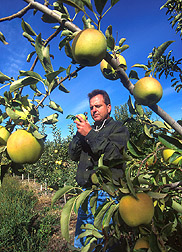 It took time for apple and pear growers in the northwestern United States to buy into the concept of areawide pest control. But when all was said and done, Agricultural Research Service entomologist Carrol O. Calkins--with help from many quarters, including state university scientists, ARS scientists and private sector partners--demonstrated that growers could band together across large areas to curb the codling moth, with reduced use of chemical pesticides.

Without pesticides or other controls, the codling moth alone could destroy up to 80 percent of the region's apple crop and half of its pears. So Calkins, as the program coordinator, decided to bring to bear everything known about monitoring the moth and curbing its spread by nonchemical means.

Calkins convinced 68 growers to try mating disruption in their orchards. In 1994, they began with 3,000 acres at five sites in Washington, Oregon and California. To reduce pesticide use, they adopted classic integrated pest management (IPM) techniques including release of pheromones to confuse moths in search of mates and, at one site, release of sterile males to prevent fertilization of females.

Today, Northwest orchardists have reduced their pesticide applications by about 80 percent. This has led to new knowledge of secondary insect pests and the natural parasites and predators that can help keep the pests in check if pesticide use is reduced.

Fruit on more than 120,000 acres of orchards in Washington, Oregon and California is now being grown under areawide IPM practices. And while ARS oversight has ended, a new university-led phase continues the innovative approach to crop protection. To read more about the five-year Codling Moth Areawide Suppression Program and its findings, see the November issue of Agricultural Research magazine.