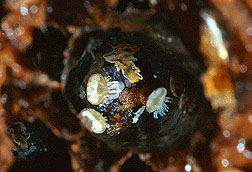 Hardy Russian honey bees that resist attack by devastating varroa mites will begin showing up in American beehives within a year, thanks to scientists in Louisiana with the Agricultural Research Service, USDA’s chief research wing. The Russian bees' genetic resistance will provide beekeepers with a tool--in addition to chemical pesticides--to control the mites.

Varroa mites--eight-legged parasites--are among the worst enemies of honey bees worldwide. In the U.S., the mites have attacked bees in almost every state. Though only about one- sixteenth-inch in size, they can destroy a hive of tens of thousands of bees in as little as 6 months. The mites have also eliminated most of North America's wild honey bees.

Under a Cooperative Research and Development Agreement signed this week by ARS and Bernard’s Apiaries, Inc., Breaux Bridge, La., bee breeder Steven J. Bernard is authorized to raise hundreds of Russian honey bee queens this fall and winter. The bees will be available for sale to U.S. beekeepers early next year. The beekeepers will use the queens to produce more queens for populating hives with mite-resistant offspring. These offspring will be fathered by male bees, known as drones, from the American hives.

Compared to domestic honey bees, the Russian bees are more than twice as resistant to attack by varroa mites, according to tests by geneticist Thomas E. Rinderer and colleagues at ARS’ Honey Bee Breeding, Genetics and Physiology Research Unit in Baton Rouge, La.

The domestic honey bee and the Russian honey bee are the same species, Apismellifera. But the Russian bees have had to develop resistance to survive in their homeland, the mite- infested Primorsky region of far eastern Russia. Rinderer studied the bees there, then imported them under a federal permit.

Besides producing honey, honey bees pollinate dozens of crops, from apples to zucchini, worth $8 to $10 billion. An article in the August issue of the agency's monthly magazine,Agricultural Research, tells more. View it on the World Wide Web at