About the Universal Soil Loss Equation

The Universal Soil Loss Equation (USLE) is hailed as one of the most significant developments in soil and water conservation in the 20th century. It is an empirical technology that has been applied around the world to estimate soil erosion by raindrop impact and surface runoff. The development of the USLE was the culmination of decades of soil erosion experimentation conducted by university faculty and federal scientists across the United States.

USLE as a complete technology was first published in 1965 in USDA Agriculture Handbook 282. An updated version was published in 1978 in Agriculture Handbook 537. The Revised Universal Soil Loss Equation (RUSLE), which is a computerized version of USLE with improvements in many of the factor estimates, was initially released for public use in 1992. Work is continuing on a further-enhanced Windows version of the software, known as RUSLE2.

History of Erosion Research in the U.S.

The earliest soil erosion research in the United States was conducted on overgrazed rangeland in central Utah beginning in 1912 by A.W. Sampson and associates. Field erosion plot research began in 1917 at the Missouri Agricultural Experiment Station in Columbia, Missouri by M.F. Miller and his colleagues. 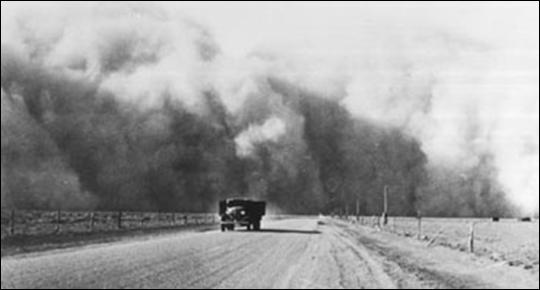 Hugh Hammond Bennett, who was a soil surveyor for the USDA Bureau of Soils from 1903 through the 1920's, emerged as a national spokesman and advocate for soil conservation and soil erosion research. In his work mapping soils, he commonly observed eroded cropland and how it destroyed agricultural productivity. Bennett brought the problem of erosion to the public's and Congress' attention; this combined with the devastating drought, wind erosion and dust storms of the "Dust Bowl" in the Great Plains provided the impetus for Congress to provide initial funding of $160,000 in 1929 for research on soil erosion. 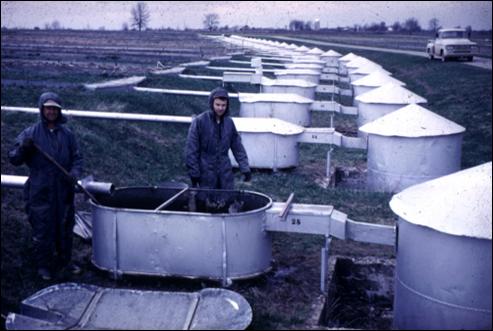 Technicians servicing erosion plots in Missouri in the 1950's.

The congressional funding was used to establish 10 experiment stations at Guthrie, OK, Temple, TX, Hays, KS, Tyler, TX, Bethany, MO, Statesville, NC, Pullman, WA, Clarinda, IA, LaCrosse, WI, and Zanesville, OH. Hugh Bennett was in charge of the creation of the stations and initial research, and the experimental studies used plot design based on the work of Miller at the University of Missouri. The most common plots were 6 feet wide by 72.6 feet long, which comprised 1% of an acre.

Research studies examined a variety of factors affecting erosion, including slope steepness, slope length, type of crop and crop rotations, conservation practices such as contouring, etc. The results from these studies as well as from additional research sites added in the 1940's and 1950's provided a large database of information on runoff and soil loss as affected by location (climate), slope, soil, and management conditions.

President Franklin Roosevelt was elected to his first term in office in 1932. As a state legislator in New York, he had represented a large number of farmers, and was quite aware of the importance of promoting agriculture and soil conservation. In his efforts to bring the United States out of the Depression, he acted quickly and decisively to create programs that would help support the agricultural economy and protect the soil resource.

The National Industrial Recovery Act was part of Roosevelt's "New Deal" program, and it established the Soil Erosion Service (SES) under the Department of the Interior in 1933, with the purpose of employing men on erosion control projects. H.H. Bennett headed the new agency, and also utilized workers from the Civilian Conservation Corps (CCC) to build drop inlets, grass waterways, fix gullies, and plant trees to control erosion. These programs implemented a tremendous number of erosion control practices using labor from young men needing work in the depressed economy. The SES set up soil conservation demonstrations in almost every state to show farmers how to conserve their soil.

SCS Chief Hugh Bennett at one of the first erosion research stations in Guthrie, Oklahoma.

The SES became a permanent federal agency in 1935 as the Soil Conservation Service (SCS), and was moved into the Department of Agriculture. Shortly after that, Roosevelt sent to the governors of each state standard legislation that could be adopted to establish soil and water conservation districts. By the end of 1937, 23 states had district laws and by 1947 all states had soil and water district laws and over 1300 Soil and Water Conservation Districts (SWCDs) had been established to assist farmers and landowners in controlling erosion problems. Local county SWCD and federal SCS employees have worked jointly since then.

The Soil Conservation Service initially worked on demonstration projects, direct assistance to farmers and landowners, and soil erosion research and development of conservation practices. However, in 1953, the Agricultural Research Service (ARS) was established to be the primary research agency for the US Department of Agriculture. Many SCS employees that were involved in erosion research became employees of ARS, and much of ARS's earliest work was focused on soil erosion and soil conservation experiments. (The ARS research program has since grown to cover a wide range of topics on animal production, crop production, product value, safety, natural resources and sustainable agricultural systems.)

Development of the USLE

The development of mathematical equations to estimate the amount of soil erosion and the impact of the use of alternative cropping management practices and/or conservation practices began in the 1940's. A.W. Zingg in 1940 published the results of a comprehensive study on the effects of slope steepness and slope length on erosion from plots subjected to natural and simulated rainfall in Agricultural Engineering. The equation to represent his data was A = C S1.4 L0.6, where A was the average soil loss per unit of area, C was a constant, S was land slope (%), and L was slope length (ft).

This was followed in 1941 in Agricultural Engineering by Dwight D. Smith, who added cropping and support practice factors to Zingg's function. His equation was A = C S1.4 L0.6 P, where P was the ratio of soil loss with a mechanical conservation practice to soil loss without the practice. The C factor in this equation included the effects of soil, weather, and cropping system. Smith used this equation to create a graphic procedure to select conservation practices in the Midwest. The idea of an annual limit or tolerable soil loss value was also introduced by Smith. This equation was used throughout Iowa by G.M. Browning and his co-workers, with added factors for soil erodibility and management. 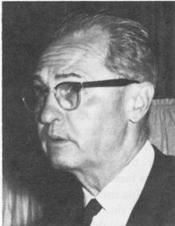 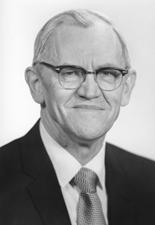 When the SCS research branch was converted into the new Agricultural Research Service in 1953, both Smith and Wischmeier became employees of ARS. The next year in 1954, the National Runoff and Soil Loss Data Center was created at Purdue University under the direction of Walt Wischmeier. The Center was to be the central location for the soil erosion data that had been collected across the U.S. since the 1930's, and was to utilize this data in further development of erosion prediction equations. An important asset at Purdue University was its leadership in computing facilities, allowing for rapid analysis and summarization of the runoff and erosion data.

The Center was located on the third floor of the Agricultural Engineering building at Purdue. The initial staff was Wischmeier, agronomist Don McCune, and agricultural engineer Don Meyer, while later scientists included Jerry Mannering, Tam Olson, Matt Romkens and George Foster. Also employed were several statistics clerks that used card punches to transfer the records for every runoff storm event in the paper database onto computer cards, that could then be sorted for use in statistical analyzes and erosion equation factor development. Ultimately, over 10,000 plot years of data were catalogued at the Center.

Major milestones and important parts of the development of the final USLE were:

1. Two workshops in 1956 at Purdue, with ARS, SCS, and university erosion specialists attending that identified the type of equation and approaches to use.

2. The extensive involvement of SCS in working with ARS during USLE development and implementation.

3. Determining the relationship between rainfall energy and soil loss.

4. Soil erodibility evaluations for soils at the runoff and erosion experiment stations.

6. Development of a rainfall erosion index.

8. Many workshops with SCS field users.

9. Publication of USDA Agriculture Handbook 282 in 1965, that presented the complete technology for USLE use.

10. Development of a soil erodibility nomograph in 1971, using data from a large rainfall simulator study. 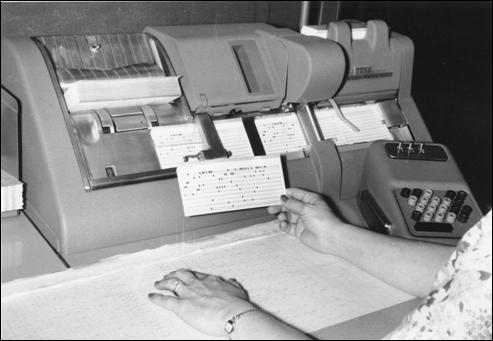 Throughout the period of USLE development, there were tremendous cooperative research efforts conducted between the USDA-ARS scientists and Purdue faculty in the Departments of Agricultural Engineering and Agronomy. Many of the ARS employees were students or graduate students at Purdue, conducting research studies on erosion processes or factors that impacted the USLE work.

The USDA-Purdue rainfall simulator, or "rainulator", was developed by Don Meyer and Donald McCune in the late 1950's as a tool to conduct experiments to supplement the USLE natural rainfall database. An extensive 5-year erodibility experiment using the rainulator was conducted on 55 Corn Belt soils by Jerry Mannering in the 1960's. This study was critically important for development of the soil erodibility nomograph that made USLE very easy to apply to any soil. 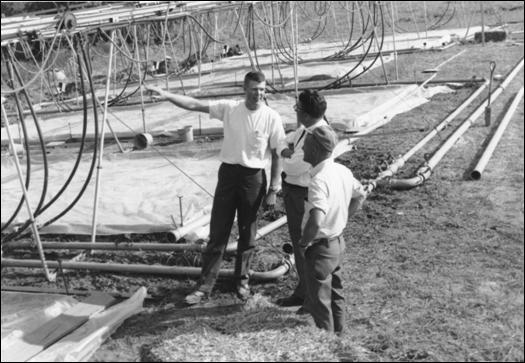 (L-R) Don Meyer, a cooperating farmer, and technician Bruce Johnson with the rainulator at a site west of Purdue in the 1960's. 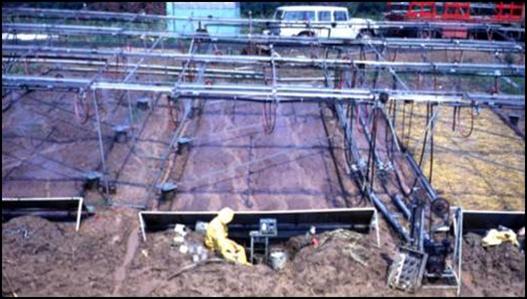 Rainulator in use at the Southern Indiana Forage Farm in 1968.

The very successful accomplishments of the Center and the tremendous impact of the USLE helped in efforts in the 1970's to gain Congressional support and funding for a physical research facility at Purdue. Construction of the National Soil Erosion Research Laboratory (NSERL) was funded by Congress in 1977, and the building was completed in 1981. Today, the ARS NSERL scientists continue research studies into the processes of soil erosion by water and development of improved erosion prediction technologies. 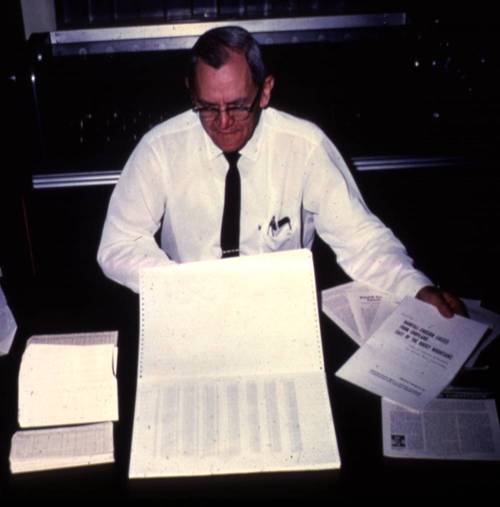 Walt Wischmeier with some of the USLE data and Agriculture Handbook 282, probably at the time of its publication in 1965.