Ras2 encoding a GTPase regulates growth and pathogenesis in Fusarium graminearum.  Fusarium graminearum is a ubiquitous pathogen of cereal crops, including wheat, barley, and maize.  Diseases caused by F. graminearum are of particular concern because harvested grains are frequently contaminated with harmful mycotoxins such as deoxynivalenol (DON). In this study, we explored the role of Ras GTPases in pathogenesis. The genome of F. graminearum contains two putative Ras GTPase-encoding genes. The two genes (RAS1 and RAS2) showed different patterns of expression under different conditions of nutrient availability and in various mutant backgrounds. RAS2 was dispensable for survival but when disrupted caused a variety of morphological defects, including slower growth on solid media, delayed spore germination, and significant reductions in virulence on wheat heads and maize silks. Intracellular cAMP levels were not affected by deletion of RAS2 and exogenous treatment of the ras2 mutant with cAMP did not affect phenotypic abnormalities, thus indicating that RAS2 plays a minor or no role in cAMP signaling. However, phosphorylation of the MAP kinase Gpmk1 and expression of a secreted lipase (FGL1) required for infection were significantly reduced in the ras2 mutant. Based on these observations, we hypothesize that RAS2 regulates growth and virulence in F. graminearum by regulating the Gpmk1 MAP kinase pathway. This research was conducted in collaboration with Dr. Jin-Rong Xu and members of his lab at Purdue University.

Mapping of the Pc locus of Sorghum bicolor, a gene controlling the reaction to a fungal pathogen and its host-selective toxin. Milo disease in sorghum is caused by isolates of the soil-borne fungus Periconia circinata that produce peritoxin, a chlorinated peptide-polyketide hybrid molecule with genotype-specific toxicity. Susceptibility to milo disease and sensitivity to peritoxin is conditioned by a single, semi-dominant gene, termed Pc. The susceptible allele (Pc) converts to a resistant form (pc) spontaneously at a gametic frequency of 10-3 to 10-4. A high-density genetic map was constructed around the Pc locus using DNA markers, allowing the Pc gene to be delimited to a 0.9 cM region on the short arm of sorghum chromosome 9. Physically, the Pc-region was covered by a single BAC clone. Sequence analysis of this BAC revealed twelve gene candidates. Several of the predicted genes in the region are homologous to disease resistance loci, including one NBS-LRR resistance gene analogue that is present in multiple tandem copies. Analysis of pc isolines derived from Pc/Pc sorghum suggests that one or more members of this NBS-LRR gene family is the Pc gene that conditions susceptibility. This research was conducted in collaboration with Dr. Jeff Bennetzen and Dr. Ervin Nagy at the University of Georgia.

Identification and expression analysis of regulatory genes induced during conidiation in Exserohilum turcicum.  Light influences numerous developmental and biochemical processes in fungi. The objectives of this research were to characterize the influence of light on growth and conidiation and associated gene expression in the plant pathogenic ascomycete, Exserohilum turcicum. We found that vegetative growth was more extensive in light-dark cycles than in constant light or darkness as measured by analysis of ergosterol content and genomic DNA. Cultures grown under continuous white light or blue light (~465-480 nm) were developmentally arrested after the formation of conidiophores, whereas those grown in continuous darkness or a light/dark cycle produced mature conidia. Incubation of conidiophore-producing cultures in darkness for a minimum of 2 hr was necessary and sufficient to initiate synchronous conidiation. To identify genes that are expressed during dark-induced conidiation, we constructed subtractive cDNA libraries from cultures grown under conidiation-permissive and -repressive conditions. From 816 sequenced EST clones in the conidiation-permissive and 310 in the repressive libraries, 12 putative regulatory genes were chosen for expression analysis by quantitative real-time PCR. The majority of those genes reached maximum expression by 2 hr after initiation of the dark period and then declined to initial levels by 4 to 24 hr in darkness. Expression of two dark-induced genes remained elevated after 24 hr in darkness but was reset to initial levels if cultures were returned to light. This study revealed several genes whose expression increased rapidly after dark induction of conidiation, suggesting that they encode regulators of asexual development in E. turcicum. This research was conducted in collaboration with Dr. Joseph Flaherty, Coker College, Hartsville, SC.

Microcycle conidiation by Cercospora zeae-maydis may impact epidemiology of gray leaf spot.  Conidiaof Cercospora zeae-maydis are the primary inoculum causing gray leaf spot of maize. On nutrient-deficient substrates, but not on water on the leaf surface, conidia germinate and develop secondary conidia on conidiophores produced from germ tubes or conidial cells. A population of conidia increases its numbers more than two-fold by two days on the surface of a water droplet and by four-fold on trichomes. This microcycle conidiation is suppressed by hydrogen peroxide and by ammonium compounds but not by nitrate compounds, amino acids, or simple sugars. Microcycle conidiation is sensitive to a-amanitin and cycloheximide, suggesting that new RNA and proteins must be synthesized. Upon transfer from a humid to a dry atmosphere, secondary conidia and conidiophores dehydrate and collapse. Mature, dehydrated secondary conidia are liberated by wind speeds about one-third those required to liberate hydrated conidia. The dispersed secondary conidia can rehydrate and germinate normally. Because this microcycle conidiation occurs at the expense of endogenous reserves, the ability to produce secondary conidia is lost after four successive cycles without a period of growth on nutrient media. This alternative method of maintaining inoculum potential during periods of fluctuating relative humidity may have epidemiological consequences when primary conidia fail to infect. 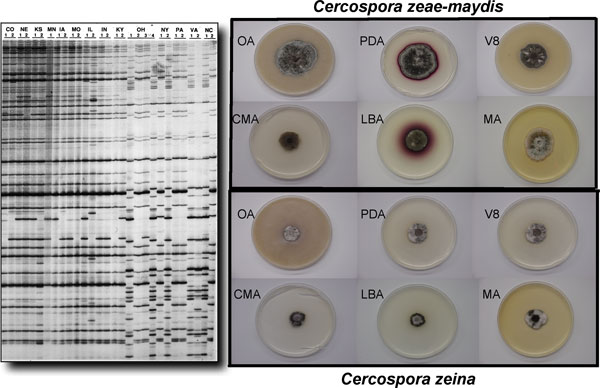 Two related fungal pathogens cause gray leaf spot of corn. Gray leaf spot was first discovered and the pathogen described and named Cercospora zeae-maydis by Tehon and Daniels in 1925. The disease was considered a minor problem until the late 1970s when the widespread adoption of conservation tillage practices and monoculture of maize contributed to overwintering of the pathogen and build-up of inoculum. Since then, the frequency of occurrence and severity of gray leaf spot have increased throughout the U.S.A. and other parts of the world. Populations of the gray leaf spot pathogen throughout the maize-growing regions of the U.S.A. were found to be comprised of two closely related forms, which could not be readily distinguished by typical morphological criteria such as conidial dimensions and conidiophore characteristics and were therefore designated C. zeae-maydis group I and group II. However, the two groups were shown to be substantially divergent based on analysis of amplified fragment length polymorphism (AFLP) data, which indicated an average genetic distance of 80% between the two groups of isolates, whereas isolates within each of the two groups were >95% similar. In addition to the distinct AFLP profiles, the two groups were distinguished by nucleotide sequences of the internal transcribed spacer (ITS)-5.8S rDNA region. In comparative analyses of ITS nucleotide sequences of Cercospora species and anamorphs of Mycosphaerella, groups I and II clearly represented different species. Recently, Crous and colleagues confirmed the distinct separation of two species and described Cercospora zeina to replace the previous designation of C. zeae-maydis group II.

In the U.S.A., populations of C. zeae-maydis (group I) and C. zeina (group II) are differentially distributed but partially sympatric. Whereas C. zeae-maydis is generally distributed throughout maize-producing regions, C. zeina is restricted to the eastern third of the country. Significantly, the African population of the gray leaf spot pathogen was found to be comprised solely of C. zeina. The considerable genetic divergence between the species, their differential geographical distribution, and the slightly greater haplotype diversity of African isolates together with historical records suggest that C. zeina originated in Africa. Analyses of the gray leaf spot pathogen in South America have indicated that both C. zeae-maydis and C. zeina comprise the pathogen population on that continent, but only C. zeae-maydis has been recovered from a limited number of specimens from China.

Only isolates of C. zeae-maydis produced cercosporin in culture; none of the isolates of C. zeina produced cercosporin under the same conditions. Even on a variety of media, over a range of temperatures, and in different light conditions, C. zeina was unable to produce cercosporin and consistently grew more slowly than C. zeae-maydis. Those results were surprising, given the critical role that cercosporin plays in stages of pathogenesis and given that both species are highly virulent and destructive. The possibility remains that C. zeina produces cercosporin in planta and that the appropriate conditions were not provided in vitro due to a more tightly regulated expression of cercosporin biosynthesis genes. Nevertheless, variation in cercosporin production indicate populations that have diverged to the point of becoming separate species.