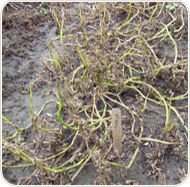 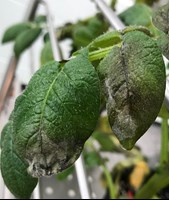 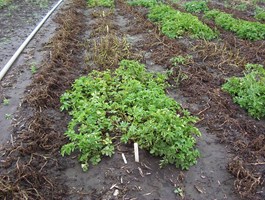 In potato, we have characterized the RB resistance phenotype using molecular biology and microscopy (Chen and Halterman, 2011).  Our results suggest that suppression of certain defense-related genes may allow P. infestans to spread beyond the site of infection in the partially resistant host despite elicitation of the HR.  Related results suggest that the IPI-O4 effector is able to suppress RB activity (Halterman et al., 2010).  When IPI-O4 and IPI-O1 are coexpressed, no HR is observed in the presence of RB, which suggests a mechanism by which IPI-O4 can not only elude detection by RB but also actively affect RB function. In order to better understand this phenomenon, I have also performed protein-protein experiments to detect the interaction between RB and IPI-O effectors.  The results suggest a physical interaction between the RB CC domain and IPI-O4, but no such interaction was observed with IPI-O1.  By comparing the amino acid sequences of IPI-O1 and IPI-O4 and using site-directed mutagenesis, I identified four critical amino acids that play an important role in RB CC and IPI-O4 interaction.  Mutations with each of the four amino acids that break down the interaction with the RBCC domain also fails to suppress HR induced by IPI-O1 to some extent. One of the amino acids, at position 129, determines hypersensitive response elicitation in planta. IPI-O mutant L129P fails to induce HR in the presence of RB while IPI-O4 P129L gains the ability to induce an HR. Like IPI-O4, IPI-O1 L129P is also able to suppress the HR mediated by RB, indicating a critical step in the evolution of the gene family.

Our work now is focused on identifying naturally occurring and engineered variants of RB that cannot be suppressed by IPI-O effectors. Pyramiding of RB, RB orthologs, and modified RB recognizing different IPI-O variants is one strategy that could be used to expand the durability of this gene.