In developing an Ac/Ds based two-element transposon tagging system, we have investigated transposition of Ds (Dissociation) in carrot (Daucus carota L). Agrobacterium tumefaciens was utilized to transform callus first with the transposase gene of Activator (Ac-transposase) and subsequently with Ds to generate calli and plants carrying both elements. Transgenic plants were regenerated with either Ac-transposase only, Ds only, or both Ac-transposase and Ds. Ds did not excise in any calli or plants transformed with only Ds. Excision of Ds was detected in calli and plant leaves also carrying Ac-transposase, based upon Southern blotting. Sequencing of EDS (Empty Donor Site) in carrot leaves indicated the presence of multiple excision events in plants which originated from the same transformation event. Completing a transposition event, reinsertion of the Ds element was detected by GUS assay and Southern blotting. New insertion sites on carrot chromosomes were cloned with TAIL-PCR and sequenced. These results suggest that the Ac/Ds based two-element transposon tagging system can be another tool for exploring the carrot genome.

Transposon tagging of genes in plants was demonstrated initially in maize and petunia with their endogenous transposable elements (Sundaresun 1996). After demonstration that maize transposable element Ac will transpose in tobacco (Baker et al. 1986), Ac was transferred into heterologous species that lack active and well characterized transposon, such as Arabidopsis thaliana, rice, and tomato for the purpose of gene tagging, promoter or enhancer trapping, or reverse genetics. Currently, a number of genes from heterologous plant species have been cloned using Ac or Ds.

No active and well-characterized transposable element has been identified in carrot. The Ac element was transferred into carrot (van Sluys et al. 1987) and about 5% of Ac element transposed in the carrot genome. A burst of transposition was not observed either during the somatic embryogenesis or in the regenerants of Ac-transformed carrot root cultures (van Sluys and Tempe 1989). In this study, we have transformed carrot with both Ac-transposase and Ds to develop a Ac/Ds based two-element transposon tagging system in carrot. Ds excised and reinserted in the carrot genome in the presence of Ac-transposase.

Empty Donor Sites (EDS) were amplified with PCR by using primers made from sequences flanking Ds on T-DNA. Amplified EDS were cloned into pGEM-T Easy (Promega) cloning vector and sequenced.

Sequences flanking Ds in the new insertion site on the carrot chromosome were amplified using TAIL-PCR (Liu et al. 1995). After separation of TAIL-PCR products on 1.5% agarose gel, the fragments were purified and used for sequencing directly. 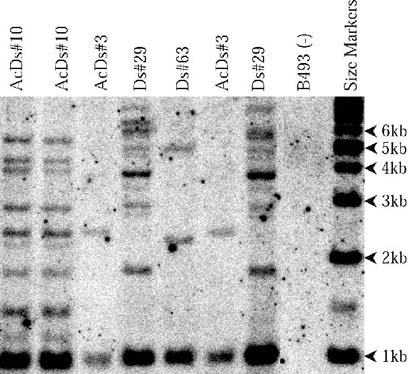 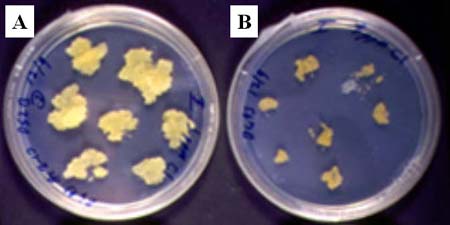 On T-DNA, Ds was placed between ALS gene and its 35S CaMV promoter, and this insertion disrupts the expression of ALS by separating it from its promoter. Excision of Ds from T-DNA generates intact ALS gene (promoter+gene) and cells having excised Ds will be resistant to chlorsulfuron. Calli transformed with both Ac-transposase and Ds in figure A above was resistant tochlorsulfuron up to 15 ppm. Non-transgenic control calli in figure B above were killed by the concentration of 1 ppm chlorsulfuron. 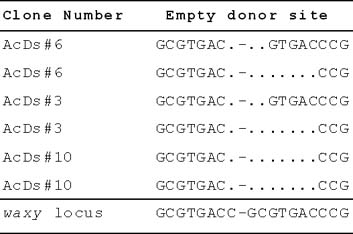 Sequences of empty donor sites (EDS) indicated two different footprints of Ds after excision from T-DNA. In two plants, there was a 3-bp-deletion (G-GC), while four plants had a 7-bp-deletion in excision sites (C-GCGTGA). Transgenic lines AcDs#6 and AcDs#3 had more than one footprint indicating multiple excision events. In the figure above, the last line is the original flanking sequence of the waxy locus of maize where Ds was inserted at the "-". Deleted sequences during excision were shown as "."

The GUS gene cloned into the Ds element did not have a promoter on theT-DNA. Therefore, GUS could only be expressed if Ds transposes into an active carrot gene in the proper orientation. Two yellow tubes (GUS-) in the upper row in figure A above contained non-transformed control calli and five yellow tubes in the lower row contained calli transformed with Ds only indicating no GUS activity. Blue tubes (GUS+) in the upper, indicating GUS expression, were transformed with both Ac-transposase and Ds. The GUS gene was also expressed in somatic embryos produced from double-transformed calli but it was expressed differentially in each somatic embryo in figure B above.

The maize transposable elements, Ac-transposaseand Ds, were successfully introduced into the carrot genome by using Agrobacterium tumefaciens in this study.

Germinal transposition of Ds in carrot will be evaluated inF2 progeny. Currently, F1 progeny of the cross between plants carrying Ac-transposase and plants containing Ds are being grown to generate F2 progeny.

These results indicated that an Ac/Ds based two-element system can be used for genetic studies in carrot.