Garlic (Allium sativum L.), an asexually propagated crop, displays great morphological diversity. The genetic diversity of 45 garlic clones and three A. longicuspis clones, the proposed progenitor of A. sativum, was evaluated using AFLP. Three primer combinations of EcoR I + 4 and Mse I + 3 (where + 4 and + 3 are the number of selective bases used) generated a total of 183 polymorphic fragments. The Jaccard's similarity matrix was used for UPGMA cluster analysis. Although similarities between the clusters were low (? 0.30), some clones within the clusters were very similar (<0.95) with AFLP analysis. Furthermore, 16 clones represented only six different types, within which they shared 100% polymorphic AFLPs. These may, therefore, be duplicates. In agreement with the results of other investigators, A. longicuspis and A. sativum clones were clustered together with no clear separation, suggesting these species are not genetically distinct. A subset of 48 clones has been analyzed with polymorphic isozyme systems. Cluster analysis of AFLP has been compared with the results of isozyme analysis.

Morphological characters may differ under varying environmental conditions. This can complicate classification of garlic. Isozyme and RAPD markers have been utilized to classify and categorize genetic diversity in garlic (Al-Zahim et al., 1997; Bradley et al., 1996; Lallemand, 1997; Maass and Klaas, 1995; Pooler and Simon, 1993). In this study, we have utilized the AFLP technique to evaluate genetic variation among the diverse garlic clones including its proposed ancestor, A. longicuspis, collected from different parts of the world. In addition, we have performed isozyme assays and compared both systems for the assessment of genetic diversity in garlic.

Young and healthy leaves were sampled from one to three plants from each clone, freeze-dried, and DNA was extracted according to previously described 1•-CTAB method (Murray and Thompson 1980).

AFLP protocols were followed according to the manufacturer's procedure with minor modification using the AFLP Kit number I (Gibco-BRL Life Technologies Inc.) for plant species with large genomes. Half of the recommended reaction volumes were used except pre-selective amplification that was performed at 1/5 the recommended volume. All polymorphic bands were identified and numbered in order, starting with the largest polymorphic fragment. Only unambiguously polymorphic bands were scored as present or absent. Similarity matrices were generated according to the coefficient of Jaccard (Sneath and Sokal, 1973). This similarity matrix was used to perform a cluster analysis using the un-weighted pair-group method with arithmetic averaging (UPGMA) (Sokal and Michener, 1958) with the software NTSYS-PC (Numerical Taxonomy and Multivariate Analysis System version 1.80) (Rohlf, 1993).

Isozyme analysis was carried out according to the methods described by Pooler and Simon (1993). Bands were scored directly from the PAGE gels as present or absent. A similarity matrix prepared using Simple Matching (SM) coefficient was used for UPGMA cluster analysis.

For isozyme analysis, consistently resolving 8 polymorphic band were scored, 3 for 6PDH, 2 each for EST and PGM, and 1 for DIA. 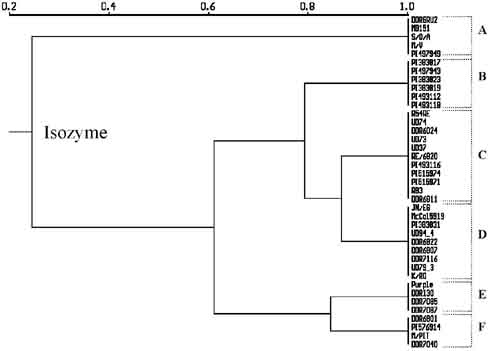 The UPGMA cluster analysis of isozyme data placed 39 garlic clones into 6 clusters. Similarities among the clusters ranged from 0.24 to 0.86 according to the simple matching coefficient. Within each cluster, clones shared 100% of isozyme markers. 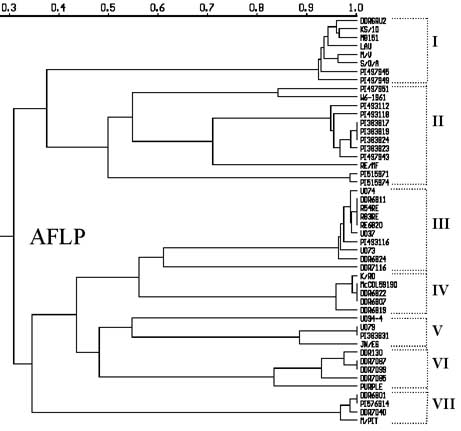 Pooler, M. R. and P. W. Simon. 1993. Characterization and classification of isozyme and morphological variation in a diverse collection of garlic clones. Euphytica 68:121-130.