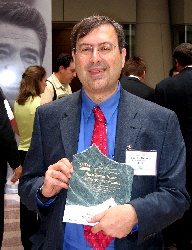 The accomplishment portion of the nomination reads:

"Soybean allergies are found in 6-8% of children and babies and 1-2% of adults. Allergies to soybeans can have severe consequences that include the danger of anaphylaxis. Soybean allergies are of growing importance to the population because soybean is widely used in processed foods, making its avoidance particularly difficult, especially for babies, where soybean-based formula is second only to dairy-based formula in use. Soybean allergies also affect young swine, calves, dogs, and trout that have economic consequences on efficient growth of animals and the utilization of the otherwise highly nutritious soybean meal for feed.

Dr. Herman discovered a protein that is accumulated in maturing soybean seeds which is the major or immunodominant human seed allergen. The immunological details of the human allergenicity of this protein were determined in collaboration with Dr. Rick Helm of the Children's Hospital of the University of Arkansas Medical School. The results of these studies provided a comprehensive analysis of how the protein discovered by Dr. Herman interacts with the antibodies of soybean-sensitive people. To eliminate this serious allergen from soybeans, Dr. Herman created a team that included both university (Dr. Helm) and industrial (Dr. Anthony Kinney and Rudolf Jung, Pioneer Hi-Bred International) collaborators that produced a genetically-engineered line of soybean in which this allergen is eliminated. Laboratory and field tests of this soybean line have shown that the allergen-null line grows and develops normally and has the same yield as its conventional source line. Using detailed analysis of the total protein content of the allergen-null seeds in comparison with the conventional parental lines, Dr. Herman and collaborators were able to show that the only alteration made in the soybean engineered to be allergen-null was the intended modification, that is, the elimination of the allergen. This type of test is critical for biosafety and established that the allergen-null soybean was 'substantially equivalent' to the source soybean line. The resulting soybean line, in which the major human allergen is removed, is the first example of using biotechnology to eliminate a significant human allergen from a major food. This provides an important example of where biotechnology can be used to improve food safety for the millions of people who must practice rigorous avoidance of allergenic foods to prevent severe medical incidents.

This research has had broad public impact and has been the subject of numerous stories in the press, including prominent media outlets such as the New York Times, Toronto Globe, BBC, Scientific American, and New Scientist magazine. Dr. Herman has been invited to make numerous presentations about this accomplishment at universities, government research laboratories, conferences, and symposia, and for the National Academy of Science. This demonstration of biotechnology to remove a major food allergen from soybean can be used in other crops that contain serious allergens.

Dr. Herman continues to expand his research to attempt to develop non-allergenic soybeans suitable for animal feed that would increase the efficiency and economics of animal production and soybean utilization. Using the soybean allergen elimination as an example, Dr. Herman's laboratory is examining using this technology to eliminate other serious human food allergens.

Because of his foresight and innovative use of biotechnology to attack the serious problem of food allergies, and his now-proven success in this approach, Dr. Herman is nominated for the Secretary's Honor Award for "Improving the Nation's Nutrition and Health."